As a film fan, it’s tough to watch awards season come to an end.  It doesn’t help that Hollywood uses this time to clean house of a lot of their uninspired releases.  Really, I cannot think of any film that I may be willing to see until May.  Maybe Oz: The Great and Powerful, but even that I only have a vague interest in.  So while I still have six more entries in my Top Movies of 2012 blog series to hold myself over, I might as well finish this season with my take on Hollywood’s Biggest Night. 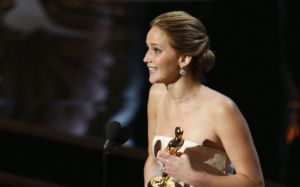 Any surprise?  Everyone has seemingly fallen in love with this girl overnight, and the love affair didn’t stop last night.  Not only does she walk away with the Best Actress statue, but she trips on her way up, making the most memorable and endearing moment of the night.  She looked beautiful as well, and is probably on a bunch of Best Dressed lists, which I would research, but I’m not into that stuff.  She also flipped off someone during the press event, which is pretty cool, too.

Another year, another host that can’t please the majority of Oscar viewers.  The Academy has had a rough few years picking their Oscar hosts.  Starting with the ill-advised pairing of Anne Hathaway and a stoned James Franco, followed up by a dated Billy Crystal, they went with Seth MacFarlane to try his brand of scatological, offensive humor.  Few were pleased.  Personally, I think he did an adequate job; at the very least, he proved better than the previous two years.  Hollywood just isn’t as hip as they’d like to think they are, and when a crowd gasps at a John Wilkes-Booth joke, you can tell it isn’t a match made in Heaven.

Sure, he was the bomb in Phantoms, yo, but he’s really made a second career for himself.  Less than a decade ago, he went from A-lister to punch line, no thanks to Gigli, over-exposure, and the whole Bennifer phenomenon.  He’s really come into his own as a director, with three phenomenal films under his belt.  It’s nice to see a redemption story and while his story of “everyone is sick of seeing my face, so I’m going to stick to being behind the camera” isn’t necessarily as inspiring as a Robert Downey Jr. “I can’t help but screw up, but I’ve hit rock bottom and now I’m going to become awesome again” story, it’s great to see him succeed and the Oscar was well-deserved.  Argo was a great achievement in film making and shows the promise of a great directorial career. 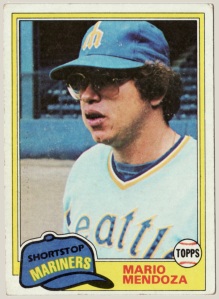 If anyone paid close attention to last week’s 5 For Friday post, you’ll notice that I did pretty poorly on my predictions, going a whopping 1 for 5.  Baseball fans will recognize this as “The Mendoza Line”.  The one I got right was my call on Jennifer Lawrence winning Best Actress, which I’m pretty happy about.  Not that it was a huge prediction, but it was the one that, in my heart, I really wanted to happen.  I came close on my prediction that Skyfall would win 3 Oscars (it won 2), so I’ll take half credit for that.  I still don’t get how a movie can split sound categories.  Not that they aren’t two completely different things, sound editing and mixing.  As an editor by trade, I know the difference, but it’s hard for me to believe that the average Academy voter can discern whether a movie’s sound design was great because of the editing or the mixing.

Probably my biggest mistake was underestimating Django: Unchained.  Part of me feels like I should’ve known better, but specifically when it came to Best Original Screenplay, I guessed voters would’ve been turned off by the whole “n-word” controversy.

She may not have won the Oscar for Best Actress, but Quvenzhané Wallis became the talk of the town this awards seasons.  The 9-year old impressed with her performance in Beasts of the Southern Wild and her precocious nature on the red carpet made her an interviewer’s favorite.  She made big news last night when she announced that she would be Annie in the next screen adaptation of the Broadway play. 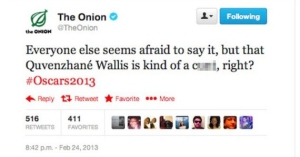 I don’t often side with those that call for censorship when it comes to comedy, but The Onion’s, shall we say, poor choice of words last night exemplified the danger of Twitter.  Live tweeting has become the inescapable evil for anyone on the social-networking site and the rapid-fire nature of the practice leaves little time for using judgment.  Still, dropping the c-word on a 9-year old is probably something the filter of common sense should have caught.

If you’re a person that watches award shows thinking: “This show could use a real show-stopping tune,” then this year’s Oscars was probably created with you in mind.  It’s no secret to anyone that watches either Family Guy or American Dad that Seth MacFarlane has a pretty good singing voice and isn’t afraid to show it, so this year featured so many singing and dancing numbers that, frankly, I lost count.  Toss in a medley of songs from the cast of Les Misérables (including Oscar-winner Anne Hathaway), Adele singing “Skyfall” and Shirley Bassey belting out “Goldfinger” it was a musical fan’s dream.

But really, it was just TOO much.  These shows always have a running joke that its going to run well into the night, but fixing this problem has an easy solution: knock it off with the singing.  No, Catherine Michael Zeta-Jones-Douglas does not need to sing a song from Chicago.  Seth doesn’t need to sing at least three times in his opener.  Kristen Chenowith does not need to come out to sing a song at the end and that’s not even half of the musical numbers that bloated the evening’s runtime.  I often say, when talking about Family Guy, that it’s the one show that actually wastes time, and it seems like Seth MacFarlane brought that sensibility to his hosting gig.