Guest Blog, compliments of Jennifer from ROI Zone.  Thanks, Jen!

Homer Simpson has held an insane amount of jobs, in an interview with Matt Groening he claimed that Homer has held a whopping 188 jobs in just the first 400 episodes.  In the 24 seasons the show has been on the air Homer’s main job has always been a safety inspector in sector 7-G at the Springfield Nuclear Plant (the job that some people claimed made Americans distrust nuclear power), but he doesn’t get a lot of money from it.  The good people at one of the many Simpson’s wikis determined Homer’s yearly salary from the information given in the classic 7th season episode Much Apu About Nothing, and the poor guy only makes $24,395.80 before taxes, which amounts to a meager $18,833.88 after deductions.

If Homer was a smart man he would have realized that some of the jobs he took up on a whim could have earned him a lot more money than what he was making at the plant.  The US Department of Labor’s website CareerOneStop.org has a lot of information on job salaries, and according to their data Homer missed out on some fantastic money making opportunities. 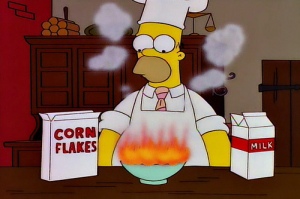 There were so many classic Simpsons episodes in season 7, and Homer the Smithers is by far one of the best.  Mr Burns’ horrified reaction to a drunken Lenny and glimpses of Smithers’ vacation were great, but the best moments came from Homer’s sad attempts to please the world’s worst boss.  Being the personal slave of an ancient energy tycoon sounds like one of the shittiest jobs imaginable, but if Homer stuck with it he would at least be able to earn a decent salary.  Personal assistants on the low end of the salary range make at least $30,000 a year, and at most can see $71, 000. 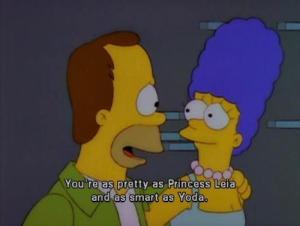 This blog post would be twice as long if I mentioned every single sales job Homer has had over the series.  He’s sold sugar, springs, used cars, and Slash-Co knives that you definitely need to remember to hand people handle first.  Being a salesman can be tough, but if Homer had stuck to any of his salesman careers he could have been making more than he did at the plant.  Even terrible salesmen on average earn $25,400 each year, and successful ones can make over $100,000. 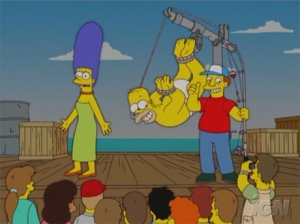 When Homer wanted to bring back sweet childhood memories for Marge in the season 18 episode The Wife Aquatic he ended up working on a fishing boat.  It’s kind of depressing to think that a fisherman can earn more than a nuclear safety technician, but the numbers don’t lie.  A fisherman that’s having a bad year can expect to bring home a little more than $20,000 each year, but a successful fisherman can earn $42,400. 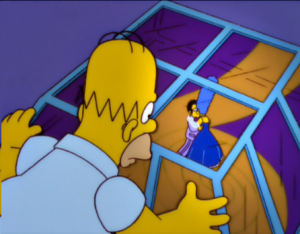 If Homer wanted to work in the field of energy he would have been better off working on an oil rig than a nuclear plant.  After Homer thought he saw Marge kissing her douchey ex-boyfriend Artie Ziff (gotta love those Lovitz voices) in the season 13 episode Half Decent proposal he ran away to work on an isolated oil rig.  Even if Homer had the most basic position at the rig he would still be earning more than he did at the nuclear plant, workers with low salaries can expect to earn $31,400 every year for their hard work. Rig workers with experience can make $94,500, and with Homer’s previous energy resource “expertise” he could have moved up the work ladder pretty quickly.

One thought on “Guest Blog: Four Crappy Jobs Homer Simpson Had That Paid Better Than the Nuclear Plant”