I don’t know much about politics, so when ranking this film as the third-best film of the year, just know that it is purely based on viewing it as a work of fiction.  I am not claiming that the events depicted are complete lies or complete truths, but as a person that doesn’t have the head for politics, the real world has no effect on this ranking or my enjoyment of the film.

Zero Dark Thirty is a fictionalized account of one woman’s determined mission to find Osama bin Laden.  It depicts the nearly decade-long ordeal of bureaucratic red tape, leads that go nowhere, and one woman who foregoes everything that can be considered a life as the manhunt slowly envelops her.

Kathryn Bigelow has really come in to her own as a director.  Her previous film, The Hurt Locker, has already garnered her a Best Director win and if this film can be considered a companion piece to the 2009 Best Picture, then I eagerly await a third.  She has managed to direct two movies about two very different sides of the Post 9/11 conflicts that are equally engaging, thrilling, and overall satisfying for this movie-goer.

It’s interesting to notice that both films deal with two characters at the clutches of a powerful yet very unique addiction.  The character of Sergeant First Class William James, played flawlessly by Jeremy Renner in The Hurt Locker, is addicted to the thrill of his job.  He’s a member of the bomb squad in Iraq and it stands to reason that he is a bit of an adrenaline junkie.  But when you get your fix for excitement by disarming car bombs in Baghdad, what do you do with yourself when your tour of duty is over?  No sooner in the film is the question posed is it answered.  The final frame of a smiling SFC James heading off for another tour is the only answer we need.

In Zero Dark Thirty, the main character of Maya’s addiction is her job as well, though it isn’t the thrill of job that gets her going; it’s the sense of responsibility.  Maya throws herself into her work with a tenacious obsession and evidently, very necessary.  As the years go on, fewer and fewer people in her department and higher up start to lose interest in the search, but it is Maya who sticks with it and, according to the movie, the reason that bin Laden is finally found.  But when he is found and her job is done, it has consumed so much of her life that she doesn’t know what to do with herself anymore.  Unlike the bomb-diffusing Sergeant in The Hurt Locker, there isn’t another bin Laden to find. 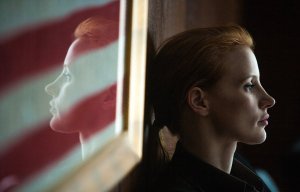 Maya is a character similar in motivation to Jake Gylenhaal’s character in Zodiac.  They both dive head first into an investigation that they underestimate and while others move on with their lives, they’ve gone too far to give up; they dig themselves further into the hole until it becomes the only part of their life.  Relationships crumble, years pass and time continues to move along.

The heart and soul of the film is the performance of Jessica Chastain, who has really had herself a good couple of years.  Here she is phenomenal, and if it wasn’t for Jennifer Lawrence’s performance in Silver Linings Playbook, she could’ve snagged the Best Actress statue.  It’s a performance that relies on earnestness and a focus on a job full of surveillance photos, testimonies, and recon, where there’s no room for emotion and Chastain delivers her performance with pinpoint accuracy. 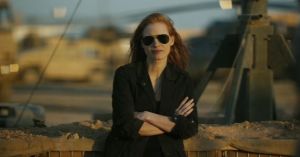 Admittedly, the subject matter is pretty dry.  This isn’t a spy movie; it’s a movie about reviewing tapes and information gleaned from sources with the occasional interrogation thrown it.  This isn’t to say that the film is boring, but I would say that it does require a bit of patience on the part of the audience.  It’s more or less a procedural detective story and employs a slow burn to get its point across.

That is until the last act, the actual raiding of the compound that bin Laden was hiding.  These scenes are thrilling as you get to see what goes into a job like this and is wonderfully directed and edited.  When you know the outcome, but still start to lean on the edge of your seat, you know you have a talented director on your hands and that’s exactly what we have with Kathryn Bigelow.