It’s Week 3 of our March Madness picks.  This time around, we’re selecting our Final Four of guilty pleasures.  We all have those movies and TV shows that we know we probably shouldn’t enjoy as much as we do, but we just can’t help ourselves.  They’re the empty calories of pop culture and sometimes, it’s just what the doctor ordered.

What is there not to like about this movie? You have 90s clothes, hockey teams from countries that have never seen ice outside of a drinking glass, and Emilio Estevez’s acting. The movie opens with Gordon Bombay tearing what we assume is every ligament in his knee and he is forced to return to Minnesota. In his own mind he is a failure, but then he is saved by Hendrix Hockey — who for some reason are in charge of hiring youth hockey coaches — and their offer to coach team USA at the Junior Goodwill Games. After combining the Ducks with players who are complete stereotypes — Oh my God, GIRL GOALIE!! — our ragtag crew journeys through the most heavily reported on youth sporting event ever. As with every Disney movie, our heroes prevail, but these ones do it with their impossible shots (knuckle puck) and newfangled penalties (2 minutes for roping?). Also, they sing “We are the champions” at the end. If you’re a kid of the 90s and don’t watch this movie every time it’s on, then please leave America. 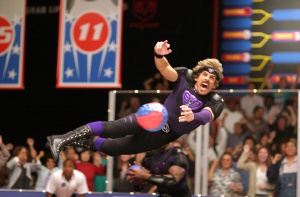 On this episode of things that Mark probably shouldn’t admit on the internet, he reveals that he DVR’d Dodgeball when it came on HBO. You read that right, I took up precious hard drive space for something that is probably in the bargain bin at a Best Buy right now, and I don’t regret it at all. I still don’t know entirely why I watch this movie when it’s on, but I do; every single time. In all seriousness, this may be one of Ben Stiller’s best performances. The ridiculousness of this movie is world class. Everything from the team’s costumes to the 1950’s style instructional video on how to play Dodgeball (The 5 D’s) is well-place and never lets the viewers forget that the movie isn’t taking itself too seriously. And will forever lead to drunk people yelling variations of , ‘If you can dodge ____, you can dodge a ball.’

I’m not sure a movie you think is good can be considered a guilty pleasure, but here we are. Love Actually is my second favorite Christmas movie of all-time — Die Hard is obviously #1 — and I’ve probably seen it more than a dozen times. Again, something that I probably shouldn’t admit on the internet. I think the number of viewings classifies this as a guilty pleasure for me, though. The movie is the best example of how to write a great ensemble because each viewing makes you change your mind about which storyline is your favorite, which is a sign that each character was well-written. Do yourself a favor and watch this movie next Christmas, and I will gladly welcome you into the club.

Full Disclosure: I’ve owned this movie on VHS, DVD and now Blu-Ray. It is also one of a handful of movies that I can quote almost word for word while watching it. This piece of art features James Van der Beek attempting a Texas accent, Amy Smart as a brunette and Ali Larter’s best acting moment. Varsity Blues is underrated for its impact on society. If you disagree, tell me how many bros would not be able to yell, “Puke and rally!” after vomiting if it wasn’t for Billy Bob, and it also introduced a generation to the whipped cream bikini. Combine how this movie is so bad it’s good with the memorable catch-phrases and the most random strip club scene in movie history, and you have the making of the ultimate guilty pleasure movie. Last but not least, let’s not forget that we can thank this gem of a film for giving teenagers everywhere the perfect comeback against their parents, ‘I DON’T WANT YOUR LIFE!’

Check out Mark’s blog and follow him on Twitter.  Check back to see Anthony’s picks and check out Dan’s picks, already posted.