Cataloging the best movies of the past few decades.

2009 was a great year for science fiction. With Star Trek a huge box office success and both Avatar and District 9 being recognized as Best Picture nominees, the genre had sort of a revival. Not included in the previously mentioned is Moon, which was arguably one of the best films of the year, while at the same time, one of the most mismanaged.

There is a lot of temptation to divulge plot points while reviewing Moon, but I’ll try to keep it to a minimum. Let’s just say that Sam Bell is on the verge of completing a three-year stint on the moon, mining it for a mineral used on the Earth for power. What comes out of it is a beautifully poignant movie about a man faced with his own mortality, played brilliantly by Sam Rockwell.

Moon, off the bat, wears its aesthetical inspirations on its sleeve. Fans of the genre could easily see 2001: A Space Odyssey in the blindingly white set pieces and in Sam Bell’s only confidant GERTY, a robot reminiscent of HAL 9000, voiced by the perfectly-cast by Kevin Spacey. But while 2001 seems to tackle the meaning of the everything, Moon is more intimate, tackling the meaning of one man; a man who can see the finish line.

Sam Rockwell’s performance is the nucleus of this film and he is fantastic, which probably won’t surprise many film fans. Rockwell has been putting together a resume of consistently solid performances in such films as The Green Mile, Confessions of a Dangerous Mind, and, most recently, in Seven Psychopaths. In what is essentially a one-man show, Rockwell performs the role of the isolated man so wonderfully. He’s rundown, on the verge of unhinged, and can’t even trust his own eyes anymore. This sort of role reminds me of Will Smith’s turn in I Am Legend, another man alone with his own mortality. Both convincingly portray a man torn apart by his own isolation. Rockwell’s performance has a different wrinkle, but I don’t want to go into spoilers. 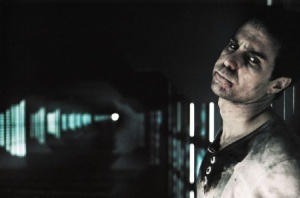 The film is directed by Duncan Jones, son of David Bowie, which may explain the influence of classic sci-fi (David Bowie, of course, the singer of ‘Space Oddity’). Duncan, in this, his debut, directs this moody character study perfectly. I love to see the practical effects used here. It shows that great sci-fi doesn’t need to be flashy or expensive and models still trump CGI.

I previously mentioned that this film was mismanaged and I mean that in terms of awards season. While I don’t begrudge Jeff Bridges’ win for Crazy Horse, the fact that Sam Rockwell’s performance wasn’t even sniffed at boggles my mind. Marketing this performance as an Oscar-contender should have been an easy job.

Moon is a small film that packs great emotion thanks to a career-best performance from one of the best working actors in Hollywood. Its tight (clocking under 100 minutes) and a fine directorial debut from Duncan Jones. Any fan of the genre or Rockwell should give this a view. But really, I’d recommend this film to anyone.

One thought on “Modern Masterpiece: Moon”