Cameron Diaz as Tina Carlyle in The Mask 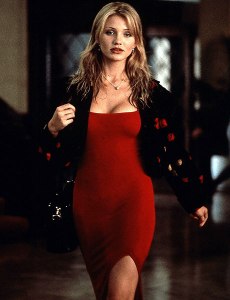 Admittedly, I’ve never been Cameron Diaz’s biggest fan.  She seems down-to-earth enough and fun, but I always thought her looks were a bit overrated.  That is, of course, except for how she looked in The Mask.  I cannot deny how attractive she looks from the first moment the camera leers up that red dress of hers all the way to the final frame.  It’s easily the best she’s ever looked and one of the best introductions to a character ever.

Elizabeth Hurley as The Devil in Bedazzled

If you told me that the Devil looked about half as good as Elizabeth Hurley looked in Bedazzled, I’m about to push a whole bunch of old ladies down some stairs for a one way ticket to the Inferno.  Besides the fact that she has model good looks to begin with, she’s got that great Brit accent and a wardrobe that hits on every male fantasy touchstone: Plaid Skirt?  Check.  French Maid?  Yep.  Cheerleader?  Absolutely.  What the hell was Hugh Grant thinking?

Carrie Fisher as Princess Leia in the Star Wars Trilogy

Do I really need to explain this one?  The gold bikini has become the standard geek fantasy since it set nerdy hearts aflutter back in 1982, making it one of the most popular cosplay choices for convention girls, attractive or otherwise.  Besides the kinky attire picked out by Jabba the Hutt, Leia is one of the strongest female characters of all-time: smart, brave, and determined to fight the tyrannies of evil.  And not once did she die because of a broken heart… Damn, those prequels sucked.

Raquel Welch as Loana in One Million Years B.C.

I wanted to go with a classic selection for my last choice.  I almost went Audrey Hepburn in Breakfast at Tiffany’s.  I almost went Marilyn Monroe in Some Like it Hot.  I nearly wrote about Grace Kelly in Rear Window.  But I don’t think I really have to apologize for my selection of Raquel Welch in a loincloth.  Sure, it’s probably a horror show underneath that fur bikini; I’m not sure they invented shaving back one million years before JC was putting around, but this film and that clothing choice became one of the most iconic pinup images of its time and it’s worthy of such a list of pure superficiality.