We know it’s now April, but the tourney is still going strong and so are we.  This week for the Final Four, we’re going with Sexiest Characters.  Whether it’s the wardrobe, the attitude, or just the actress, these characters touch us in all the naughty places.

Elisha Cuthbert as Danielle in Girl Next Door

In a film that includes the adult film industry, it may seem odd that the sexiest character is the one that doesn’t take her clothes (completely) off in the movie. Elisha Cuthbert’s Danielle is exactly what the movie title insinuates, the perfect girl next door. She uses those sultry looks that were out of place on 24 to her advantage, but she also had enough personality to make her seem approachable. The choice to be minimalist with her make-up and to dress more conservative than the other girls in the film is what grabbed the attention of every red-blooded American male (or female). The scene most people remember is when Emile Hirsch’s character answers his door to a rain-soaked Danielle and she says, ‘Hi, I’m all wet. Can I come in?’ But the moments that I found her most sexy was when she was wearing a hat, and I still don’t know why.

So this was an easy one. The English actress is a sex god for an entire generation of nerds and jocks alike. While her appearance is very 80s-tastic, she still gets any teenager —no matter what decade they were born in — to take notice and wish they could build their own woman with their computer. Like every other person on this list, LeBrock has that quintessential moment that every sexy character is known for. For LeBrock’s Lisa, it is her entrance out of the bathroom after her creation wearing nothing but a half t-shirt and very tiny panties. 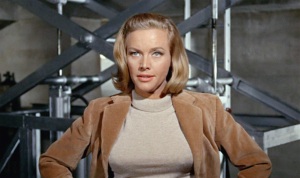 For those of you that know how much I love Bond movies, it should come as no surprise that a “Bond Girl” makes the list. Sadly, I did not choose Dr. Christmas Jones from The World is Not Enough. In all seriousness, many fans of the series may be surprised by my choice of Pussy Galore instead of Honey Ryder (Ursula Andress), but honestly Ms. Ryder wasn’t even in the conversation. The choice really came down to Pussy Galore and Tatiana Romanova, who was played by Daniela Bianchi in From Russia with Love. The deciding factor was basically which character I found sexier when I thought back on the films (Who would’ve thought?). Also, Ms. Galore’s entrance is one best in the series history, and she is often mistaken as the girl Bond finds painted in gold, which is the movie iconic scene. 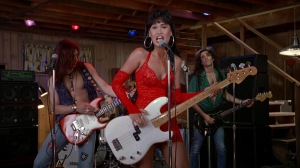 Might as well finish off the list with a character from the 90s, and the first one I found sexy before I even knew what that meant. Tia Carrere played Cassandra, a rock singer who falls in love with Wayne. Carrere, along with Clueless’ Alicia Silverstone, was the epitome of early-90s sexiness. As an adolescent, I had an attraction to her that I didn’t quite understand. It was probably her exotic look, or her singing ability that drew me in; both factors that attract me to women even today. Carrere’s Cassandra also has the unique distinction — on this list — of being sexy in two films, and she’s the only one that made her own (fantastic) music video. But she is best known for rocking out with her guitar to Ballroom Blitz in that completely sexy 90s red dress.

Follow Mark on Twitter and Check out his Blog called Off the Mark Thoughts.  Check back for more and be sure to check out past Final Four weeks.