Recently, we saw the season finale of The Walking Dead. Although it was sad to know we had to wait until October for the next season to begin, we had the good fortune of Game Of Thrones finally returning for its third season on the very same night. It was the truest meaning of when one door closes another one opens, but with more boobs behind those doors and less zombies. So this got me to thinking, which one of these shows is the superior? They are both arguably the hottest shows on television to date, both are beloved by geeks and regular folk alike, and both kick serious ass. I finally know why God put me on this good Earth, to settle this age old debate once and for all!

Now, I’ve read almost all of the graphic novels of The Walking Dead and I have not read any of the A Song Of Fire And Ice series which Game Of Thrones is based off of, so I can’t grade these two based on their print counterparts alone which means I will strictly be going off the television shows. After talking with my good friend and editor of this fine site Anthony “All American” Del Vecchio, I decided that the categories that I will judge will be characters, storyline, villains, and violence. Remember that these are just my opinions, and if you feel that I have left out anything please feel free to leave a comment and I will either nod my head in approval, or just ignore it.

There are so many characters in this show and it’s every expanding with each new season that I could sit here forever and I wouldn’t be able to touch on them all. The core group that the show centers around basically are the Starks, the Lannisters, and Daenerys Targaryen (the one with the dragons) with other lesser houses thrown in to keep things nice and confusing. The beauty of these characters is all of them have an agenda. The Lannisters will do anything to seize power and keep it, the Starks want to kill the Lannisters, Daenerys wants to claim the throne, and meanwhile you have all the minor characters just trying to keep their heads afloat by backstabbing everyone. Although there are so many characters, the show does an excellent job in building up each and every single one. You get to know the insignificant characters just as well as the major character because everyone in Westeros has some talent or skill to bring to the table, and you feel for each character whether those feelings are good or bad. 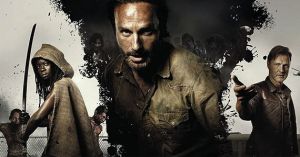 Pretty much the complete opposite of Game Of Thrones, we only have a centralized group of characters that we stick with in The Walking Dead also known as “the survivors.” This can be a good thing for this show because they get to spend more time building up their main characters as opposed to GOT who spend time on whores and body guards. This can also play against the show because when they actually do start to delve into some minor characters, they die off the next episode. The characters do a great job of showing us how easy it is to lose ones humanity when faced with such dire consequences as they are that you really begin to feel that they are the real monsters compared to the zombies that populate the land.

Both shows have amazingly complex characters at their disposal. They both have that one character that has become a fan favorite (Daryl Dixon and Tyrion Lannister) and they both have characters that you deeply care for and deeply hate. To me it comes down to the more interesting characters. And to me I feel like the advantage goes to Game Of Thrones. I have enjoyed watching Daenerys go from an innocent girl to a barbarian warrior. I like seeing how minor characters have such an impact on the major characters that it forces you pay attention to their every move. Where as in The Walking Dead the minor characters don’t have any impact whatsoever and don’t really come into play very often. Daryl Dixon can only take you so far, point goes to GOT.