This week, The Great Gatsby comes to theaters.  Whether you loved or hated the book, chances are it was part of your course curriculum some time in high school.  So in celebration, I’m going to pick five summer reading books that I’d like to see a movie adaptation.

Admittedly, this is the only book on this list I actually haven’t read, though that isn’t without trying.  On several occasions, I’ve tried to read this but just couldn’t get into it.  I’ve read other things on Ken Kesey’s group and watched countless documentaries, but I just can’t seem to get through Wolfe’s prose.  So make it a movie.  The subject matter is interesting enough to make a compelling feature film, as is basically anything from the drug culture of the 1960s.  The opportunity to see the Merry Pranksters in all their ridiculous glory seems like too good a movie to not happen.

#4: The Catcher in the Rye by JD Sallinger

I’m not the biggest fan of Sallinger’s novel on the plight of being an asshole teen, but I definitely think that this book is long overdue for an adaptation.  Last year, we saw in The Perks of Being a Wallflower how great a movie can be that speaks to and about teens in a frank and real way.  The Catcher in the Rye can succeed in the same way, provided it doesn’t get watered down and is given an R-rating.  If done right, it could be an important movie for years to come.

#3: A Confederacy of Dunces by John Kennedy Toole

This project has been notoriously in development hell for decades, having been attached to everyone from John Candy to Will Ferrell as Ignatius.  Toole’s posthumous hit is such a fine piece of comedy that it’s hard to believe that no one has gotten their act together yet to bring it to the big screen.  Seriously, if you have to get that kid that made out with Bar Rafaeli in the GoDaddy commercial, let’s get this thing done already.

#2: Something Wicked This Way Comes by Ray Bradbury

I put this one as my #2 because, while Disney adapted this book in 1983 as a live action, personally, I think it would work much better as an animated film.  There are just few things in this fantasy novel about a fateful carnival that I don’t think can be done justice in a live action setting, other than being heavily CGI-ed.  And by that point, why bother making it live action?  I’m talking anime-style animation and Marilyn Manson lending the voice to Mr. Dark.  Tell me that doesn’t sound great. 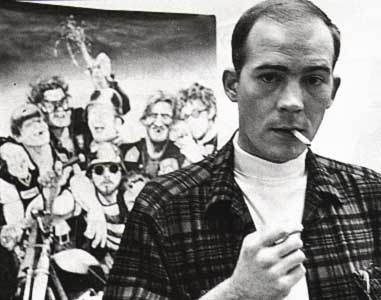 How has this not been done yet?  We’ve gotten adaptations of Fear and Loathing in Las Vegas and more recently The Rum Diary, now it’s time to delve into Thompson’s writings on the notorious biker gang.  Thompson’s writings are always vivid and captivating and Hell’s Angels is arguably his most cinematic writing besides Fear and Loathing.  Besides, if you can’t do a motorcycle gang movie when Sons of Anarchy is still on the air, when can you?