Sometimes, you just have that friend that gets you into trouble or just becomes the thorn in your ass for your entire relationship.  Maybe they mooch off you, get you in trouble with Russian gangsters, or bang your mom.  Regardless of their misdoings, for some reason, you can’t break the friendship.  Here’s who we think are the best examples of these types of friends from movies.

Finally, a Jersey Boy makes the list. Randal Graves is the lovable slacker and best friend of fellow slacker Dante from Kevin Smiths View Askew Universe. Randal is a pretty nice guy except for when he’s constantly getting Dante into terrible, terrible situations. What makes Randal a bad BFF is that he’s totally content in being a douchebag with no life goals other than owning the local Quick Stop. Randal has run the gamut of shittyness: he’s given children cigarettes, he bought a donkey sex show for Dante’s bachelor party, and casually throws around the N word. Randal Graves, giving Jerseyites a good name since 1994. 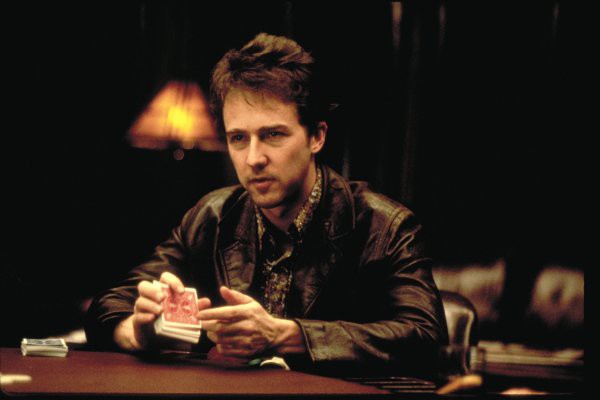 Best friends can bring out the best and worst in us depending on the situation. They can encourage us to talk to the woman we been too nervous to approach, and they can also encourage us to take that extra shot of Jaeger that causes you to spend a night on the bathroom floor. So how do you know when they are more bad than good? Probably when he/she helps put you in debt to a poker-playing Russian mobster in less than a week.

“Worm”, played by Edward Norton in Rounders, is the worst best friend ever portrayed on film. After being released from prison, he proceeds to turn his best friend Mike’s life upside down. The latter was a former gambler who stopped playing after losing $30,000 to the notorious, Teddy “KGB”.

Since Worm’s incarceration, Mike has been living the perfect life and he’s ready to put his old ways behind him. That is until Worm reappears and takes him on a five-day gambling spree. You see, Worm is in debt to the aforementioned Teddy “KGB”. After playing well enough to almost pay off the debt, Mike and Worm lose everything when the latter is caught cheating. After finally hitting rock bottom, Mike has had enough and cuts ties with his personal demon, and instantly, everything improves. He beats KGB, pays off all his debts and has enough left over to begin his life as a professional gambler in Las Vegas.

Only lousy best friends hold their friends back, and Worm was the worst kind.

I’ve already talked about how inherently evil a high school girl can be, and that’s just in your run-of-the-mill bitchy teen sort of way.  Combine that with a malevolent succubus that feeds off the blood of all the male students in town and you have Jennifer Check: the Worst Best Friend Ever.

From the onset of the film, it’s obvious that the lifelong friendship between Needy Lesnicki and Jennifer Check has seen better days.  As they’ve grown older, they’ve also grown apart, and one thing driving this chasm between the two happens to be Jennifer’s selfishness.  That’s nothing, though, once Jennifer takes a ride with the band Low Shoulder and winds up with a demon succubus inside of her.  If you think about it though, in real life she probably would’ve been gang-raped and drowned in Devil’s Kettle, so this is sort of a better option.  Anywho…

If self-involvement wasn’t bad enough, Jennifer terrorizes the school by killing as many boys as she can in order to drink their blood.  If that isn’t fucked up enough, she also tries to seduce Needy’s boyfriend Chip and then winds up killing him.  And, oh yeah, she totally sexually assaults Needy by sticking her tongue halfway down her esophagus.  Sickening really.  I can watch this all day and not get over how disgusting this is.

Who’s your choice for worst movie best friend?  Vote in the poll below or comment with your pick.