It’s Horror Month!  My favorite time of the year and to celebrate, we’re kicking off this month’s Number 1’s with a list of the very best scream queens.  The horror genre would be nothing without these ladies, and we’ve got some of the best for you.  But who do you think is worthy to be called the best?  Read our picks and vote in the poll below.

Fay Wray was one of the first if not THE first scream queen to come into existence in the early 1930’s back when we were all twinkles in our father’s father’s eyes. Wray (or as I like to call her “The Fayster”) starred in some lesser known horror movies for RKO Radio Productions such as Doctor X and The Most Dangerous Game, but you might know her as the original beauty that tamed King Kong. Wray played the famous damsel in distress Ann Darrow and did such a convincing job at being scared you would have thought that Kong really was a 30-foot ape and not a stop-motion puppet.

Unfortunately, she never did more horror movies after King Kong but her presence was already imprinted forever in Hollywood, and to this day she goes down as waaaaaaaaaaaay better than Naomi Watts as the best Ann Darrow. Hopefully, she’s still doing what she does best, screaming at large fake creatures up in heaven. 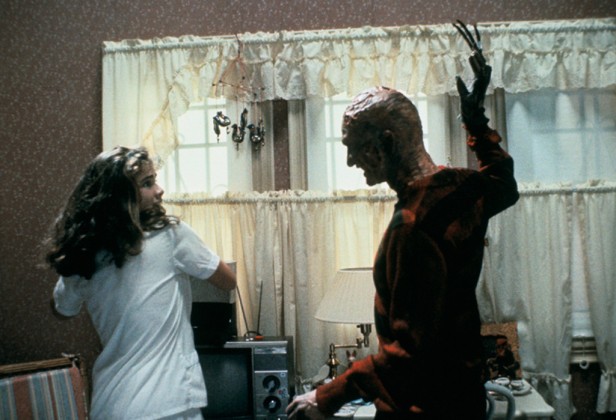 The obvious choice here is Jamie Lee Curtis, but I felt if we were going to write about “scream queens”, why not choose the one I believe is the unquestioned top queen of the 1980s: Heather Langenkamp. She first screeched into our hearts in the original Nightmare on Elm Street as the movie’s high school protagonist, Nancy Thompson. Nancy, as the daughter of one of the mob that “killed” Freddy Kruger, inherited the unlucky gift of being terrorized by Freddie in her dreams. She did such a good job in the original film that Wes Craven brought back the character not once, but twice and each time Langenkamp reminded everyone who the “scream queen” to beat was. She didn’t have a long career, but she was the best of her era.

Sure, this is probably an obvious choice, but I would be embarrassed, as the editor of this site, if Jamie Lee wasn’t an option on this list of Number 1s.  Why even put this list together if you don’t have arguably the best on here?

Daughter of former scream queen Janet Leigh, Jamie Lee set the bar in the 1970s with her role as Laurie Strode.  To me, the original Halloween is as close to a perfect horror film as there has ever been and a lot of this has to do with Jamie Lee Curtis.  She fits the survivor girl archetype perfectly, and is a great example of a strong female lead.  She’s smart, crafty, and she’s able to stand toe-to-toe with Michael Myers.  Obvious choice or not, she deserves the accolades.

Who’s your pick for best scream queen?  Vote in the poll below or comment with your answer.