If you weren’t a fan of the original Star Trek series, you may not be aware of what a “red shirt” is.  If you’re a fan of The Walking Dead, however, you’re about to become very familiar with it and that is not a good thing.

At the end of last season, we saw the end of Woodbury and when that society broke down, our fearless band of misfits took in a few dozen of Woodburians to form basically a New Woodbury within the grounds of the prison.  Why did the writers do this?  Is it so we can become attached to even more people trying to survive?  If the season follows the same path as the season premiere, not exactly.

Getting back to the “red shirt” idea: in the original Star Trek, red shirts were members of the Star Fleet not named Kirk, Spock, or McCoy.  They were phaser fodder and were essentially there to make it seem like the stars were in grave danger, even though logic would tell you that the main characters were virtually immortal as long as ratings held up.  Sound familiar?

In this first episode since the Woodbury-Prison merger, the new members are seemingly pulling their own weight and the community is really getting it together.  They’re functioning more and more as a society and as we know, numbers are their greatest weapon.  The walker drama is minimal within the prison at this point, as there is a constant presence of people pulling the old fence trick.  We’re even introduced to some of these new characters including geeky boy, Beth’s boyfriend, and former South Central Louisiana State University place kicker Derek Wallace (or D’Angelo Barksdale, if you prefer).  I didn’t care to learn anyone’s name because it may well have been Ensign Ricky. 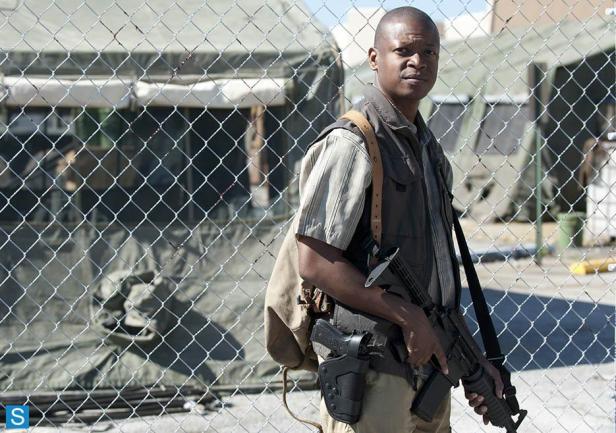 There were two main storylines going on in this episode.  The first one involved a group of the commune members lead by Michonne and Darryl heading to a super store for supplies, while all the other members we don’t really know yet prove just how useless they are.  Barksdale can’t even look at wine without knocking the whole shelf onto him.  This scene does have some cool imagery, though; some of which we’ve really never seen in a zombie film before.  The commotion from inside the store leads walkers stuck on the roof towards the crew.  As they walk towards the steps, the roof (weakened by a helicopter crash) starts to give and it starts raining zombies in the store.

There is some walker fighting, but at this point, Darryl and Michonne never seem to be in too much danger when it comes to walkers.  This is probably pretty accurate; after this long, as the most competent of walker hunters, they’d have this down to a science, but it doesn’t do anything for the drama.  Tyreese, on the other hand, seems lost in the shuffle.  He doesn’t seem to know his place on either side of the fence and I am starting to wonder if he isn’t just a glorified red shirt.  If it weren’t for how prominent he was in the books, we wouldn’t have much attachment to him at this point, so he’d actually be pretty expendable.  You heard it here first: the next prominent character to die is Tyreese.  I bet before the mid-season hiatus.

Meanwhile, Rick goes beyond the fences to check the hunting traps and comes across a woman on her own.  She’s surviving alone with her husband who is “sick” and persuades Rick to come back to their camp with her in hopes to join the survivors at the prison.  Spoiler alert: she’s crazy and her husband is a walker she’s trying to feed Rick to.

There’s also another storyline about Carl being kind of a dick to all the other kids in the prison and geeky kid getting geek AIDs and dying because he’s a red shirt.  Obviously, this death will have a point, but if the writers want me to care about this kid, he hasn’t earned any sort of pathos.

This isn’t necessarily a bad episode.  As I said, there are some cool moments in the store, but the episode kind of tips its hand at some story problems to come.  The brilliance of the first few seasons was how intimate the show felt and just how expendable everyone seemed.  Now that we’ve been with these characters for three seasons, there is a hierarchy of characters forming that takes away the drama and suspense.  With the addition of the red shirts, it seems like even the characters lower in that hierarchy have a level of security within the storyline.

Think of the last few major deaths of the show: Lori, T-Dog, Merle, and Andrea.  Let’s throw out T-Dog immediately because he had severe “horror movie black guy syndrome”.  Merle was in suspended animation for two seasons just so he could be brought back and then killed.  As for Lori and Andrea, maybe it’s a bit of misogyny (or in Andrea’s case, a completely mishandled character), but there were no two characters that were disliked more than these two women.  You’d probably have to go back to Shane to find a character viewers actually felt a loss with.

The point is that while character drama is important and one of the things that made this show so interesting from the beginning, there still needs to be some sort of dread that we will eventually lose the characters that we care the most about.  Right now, though, it just seems like the show has built a buffer around the core and that buffer is the citizens of Woodbury.