I can’t believe Horror Month is more than half over!  I don’t want it to end.  Honestly, I’ve been having a lot of fun this month with all the horror writing.  This week’s 5 For Friday is all about those teens that are stuck in a slasher film.

If you’re a fan of the genre, you’re probably already familiar with the archetypes that go along with it.  There’s the token ethnic character that usually dies first.  You have the jock and slut who usually live long enough to have a romp between the sheets and of course, you have the girl that makes it out at the end: the Final Girl.

I’ve put together a list of the best representation of each of these archetypes to create the essential group of archetypes.  I typically stayed away from putting multiple characters from the same movie or series in this otherwise, it would probably just be made up of characters from Halloween and A Nightmare on Elm Street.

Oftentimes, these characters are gone long before we ever get too attached to them.  Not that we get much from Bird, but in the limited screen time, in a movie full of prickish high school dudes probably not above date rape if not for all the killing going around, Bird seems to be the most likeable of the group.  Maybe he’s just smoother than the other guys, but it doesn’t seem like he’s walking around with a chronic erection and that’s actually more than we can say about the other male characters in the film.

Dan gets the nod here for a very special reason: he survives a whole movie!  That’s right, Dan and his girlfriend Alice survive A Nightmare on Elm Street 4: The Dream Master and their parting gift is teen pregnancy and having to face off with Freddy all over again.  Dan is actually out of the game early, as he is the first to eat it in the 5th installment, but that isn’t before we get to see him with some family drama about where he’s going to play football in college.  It’s very Varsity Blues and while we never see him throw a pass, I bet Danny Boy could knock a beer can off Freddy’s scarred dome if he wanted to.

Back when Jamie Kennedy was somewhat likeable, this is the movie that put him on the map.  This is an important role in horror film history.  While Scream is considered the mirror that’s being held up to the genre, Randy is the one doing the holding.  He’s the most self-aware character in a movie full of characters that know they’re filling out certain roles.  The scene in which Randy runs down the rules of the genre at the party is one of the best scenes in the movie. 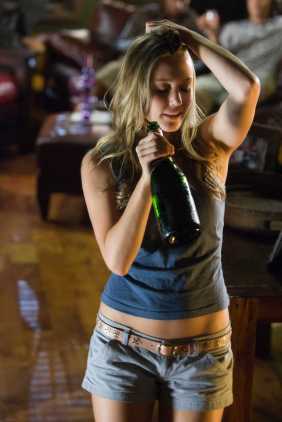 Truth be told, I’ve yet to see the Friday the 13th remake from beginning to end in one sitting.  I’ve seen all of it, but only here and there.  That doesn’t mean, however, that I haven’t seen a few of Julianna Guill’s scenes numerous times.

In a series that usually promised some “Grade A” nudity, the series out-does itself with Julianna Guill.  I don’t want to go into a whole lot of detail so I don’t sound too much like I should be standing at least 50 feet from her, so I’ll just say that the casting director should deposit his or her paycheck with pride.

I’ve already gone into what makes Jamie Lee so great earlier this month with our list of Number 1 Scream Queens.  To me, as I’ve said, I think Halloween is as close to perfection as the genre gets and a large part of that is due to the performance Curtis gives.  Strong, resourceful, smart… give her all the adjectives because Laurie is everything you want in a Final Girl.  It’s the most important role in any slasher film and Halloween is the best slasher film only because Curtis hits it out of the park.