In the months leading up to the release of The Hunger Games back in early 2012, the phenomenon was inescapable in my office.  Before The Walking Dead and Breaking Bad reached the heights of their water cooler dominance, it was all about The Hunger Games.  I picked up the first novel and I found it to be enjoyable and the first film was a worthy adaptation.  With a bigger budget, recognizable vet actors to round out the cast, and a second chance to do things right, Catching Fire, the second film in the series is, dare I say, great.

Catching Fire takes the reigns from the original at about the same point as we left it.  Katniss and her family (as well as Peeta) are now living in District 12’s Victory Row.  Compared to the rest of the District, it’s a step up, but obviously the neighborhood is pretty much a ghost town, as the victors of the Hunger Games don’t usually end up coming from District 12, except for Haymitch and our protagonists, obviously.

Since Katniss’ little act of defiance to end the games, revolution has become more than a whisper throughout the Districts of Panem and President Snow is none too happy about the fact.  Katniss has become a symbol of defiance and if she is looking to keep her family safe, she’d be smart to make herself look less like the ray of hope that everyone else believes her to be.  She learns quickly and while she tries to play the game (the media circus game, that is) in the interest of self-preservation, the damage already seems to be done.  Fighting follows her and Peeta’s tour of the districts and it’s obvious to President Snow that something needs to be done with her.  Enter: Plutarch Heavensbee, the new Game Maker.

As the next Games happens to be the 75th Hunger Games, Heavensbee uses the idea of a Quarter Quell to disguise the plan to snuff out Katniss: the participants will be comprised of past victors.  As Katniss is the only female from 12 to ever win, her fate is sealed and is chosen for the games and while Haymitch is selected, Peeta volunteers and follows Katniss into the Games.

As a die hard Star Wars fan, if I hadn’t seen this film for myself, I would not hesitate to call any comparisons to The Empire Strikes Back purely blasphemous, but I’d be lying if I said that this was anything but an apt comparison.  Do I think that Catching Fire will go down as one of the most iconic films of its generation in the way that The Empire Strikes Back has?  No, but within its own generation and its own canon, Catching Fire is the new The Empire Strikes Back.  And this comparison is probably not accidental.  These are, essentially, two stories in a long line of history that tell about the classic good vs. evil trope and oppressive governments.  However, the tone of this film is strikingly similar and the ending (spoiler) leaves almost in the same place of doubt that ESB left us more than three decades ago.

In this, the second time out for the franchise, the makers look like they identified the problems with the first one and the resulting film is, dare I say, great.  One of the major gripes with the first is the lack of the political aspect of the book and in Catching Fire, the tension between the Capitol and the Districts is one of the most engrossing parts of the film.  With each trip to the following district, Panem seems to be a powder keg waiting for a light.  It’s Rome, just before the fires.

One of the advantages this film has over its predecessor is money.  While The Hunger Games was a satisfactory film in its own right, the CG effects left a bit to be desired.  Luckily, it still grossed a ton of money and the producers put it to good use for Catching Fire.  I wouldn’t say that the film relies heavily on CG, but when it does, it does it well.  While the first film looked cheap in its effects, especially in the fire dress, the sequel perfected the important effects and the film is greater for this effort.

Catching Fire introduces a new director to the series and, even if it is addition by subtraction, this changing of the guard is still for the better.  Francis Lawrence (I Am Legend) isn’t exactly a household name and not an auteur in the loosest definition of the word, but what he is able to do in this film is rectify the mistakes the first film made in the action sequences.  No longer saddled with shaky-cam syndrome, the action sequences are more than just ambiguous colors moving around the screen; you can actually figure out what is going on.  It seems like it isn’t asking a lot to tell a coherent visual story during action sequences, but with introduction of digital filmmaking, it has become less of a given.

There doesn’t seem to be enough virtual ink to talk about how good Jennifer Lawrence is in just about anything she decides to do.  The likeable star gives such a strong performance and the character is so well developed that it is a perfect combination of actor and writing that the part seems to have been Lawrence’s since the first book was in the rough draft stage.

Familiar faces pop up in the movie and each get their moment to steal a few scenes.  Jena Malone pops up as one of the other former winners stuck fighting for their lives once again and she’s less-than-happy to say the least.  Jeffrey Wright plays a tribute as well, and plays a big part in the climax of the film.  But the biggest addition is Philip Seymour Hoffman as Plutarch Heavensbee.  It’s easy to take Hoffman’s abilities for granted when he is acting in film’s destined for Oscar talk like the 2012 film The Master, but in a film like this, his gravitas stands head and shoulders above the rest.  That isn’t to say that everyone else isn’t pulling their own weight, but it’s evident as to why he is considered one of the best actors working today.  He commands screen presence and he does it without movie star good looks. 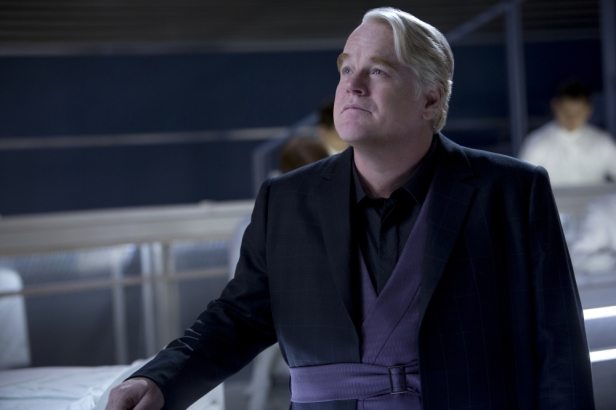 Usually, in a Hunger Games review, the reviewer will take the time to kick The Twilight Saga when it’s down, but with Catching Fire, comparisons between the two film series no longer seem apt.  Keeping The Hunger Games series in the junior league category of teen novel adaptations is doing a disservice to an honest-to-goodness excellent film and an action film that has more to say than the summer blockbusters that consistently disappointed earlier this year.

One thought on “The Capitol Strikes Back – The Hunger Games: Catching Fire Review”