If there’s a literary classic that has been beaten to death by Hollywood more times than anything Shakespeare ever wrote, it has to be Charles Dickens’ holiday classic A Christmas Carol.  It’s hard to say why exactly this story gets the remake treatment so often.  Maybe it has to do with its simple story structure or the fact that the themes are easily transferred to modern times.  Either way, there’s plenty of adaptations out there to watch.

Scrooged is probably one of the more inventive adaptations, as director Richard Donner sets it against a backdrop of a 1980s television studio and lets star Bill Murray go wild.  Murray is in fine form in Scrooged as cynical TV exec Frank Cross.  Murray’s schtick has often been the cynical asshole type and Cross is probably the biggest asshole he’s ever played, which is appropriate as Frank is the surrogate Scrooge role in the film.

The film wastes no time in setting up just how despicable Frank Cross is, chewing out his board of directors and firing one of them right on the spot… on Christmas Eve.  He’s also pretty terrible to his assistant Grace (Alfre Woodard) who steps in for Bob Cratchit.

In pure meta form, Frank is overseeing the station’s big production of A Christmas Carol starring Buddy Hackett and it’s interesting to see the running parallels between Frank’s own experience of his own fate as well as the more standard retelling of the story.  It’s a clever wrinkle in the film that separates it from other versions of this familiar story.

The beats are pretty much the same as you would expect, but the film’s casting and characterization of the three ghosts is what sets this one apart.  The movie doesn’t get going until New York Dolls frontman David Johansen shows up as the Ghost of Christmas Past.  He gives the movie a certain manic energy as he takes Frank back to his boyhood home, where five pounds of veal is a great gift, and to show Frank how he screwed up the one meaningful relationship in his life with Claire, played by Karen Allen at the peak of her adorableness.

From there, Carol Kane takes the baton as the Ghost of Christmas Present, a demented fairy that takes pleasure in Frank’s pain.  To top it off, the faceless Ghost of Christmas Yet to Come is one of the most frightening portrayals of the third ghost, simply played as a dominating figure with a TV screen for a face.  It used to freak me out as a child and its still quite chilling.

Like any other telling of the story, Scrooged ends on a happy note, but adds a redemption factor when Frank is able to mend the relationship he lost all those years ago.  It all ends with a group rendition of “Put A Little Love In Your Heart” which is a great cap to a movie that, admittedly, went to some pretty dark places before bringing it to a happy resolve. 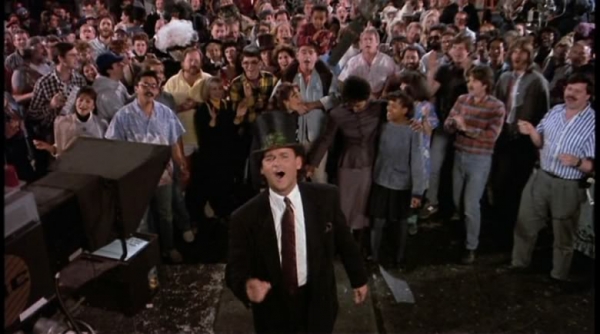