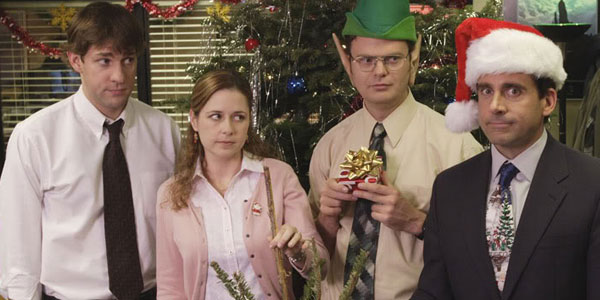 A time honored tradition of TV sitcoms is to acknowledge the major holidays in their plots.  Friends paid special attention to Thanksgiving, for example, while others loved to make Halloween episodes.  Today, we’re going to hand pick our favorite Christmas-themed sitcom episodes.  Don’t forget to vote for your favorite at the bottom of the list.

Dan’s Pick – The Simpsons, “Simpsons Roasting on an Open Fire” 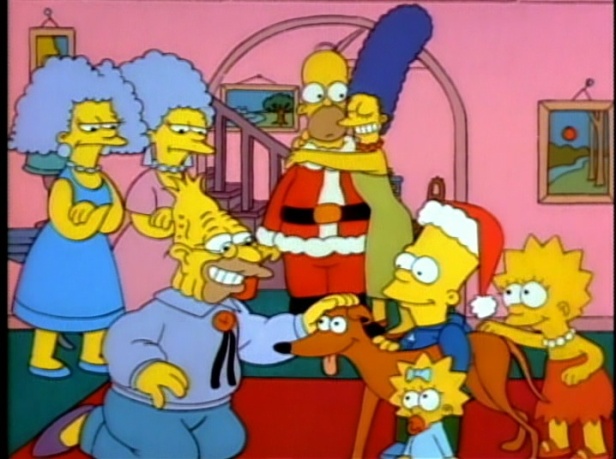 This episode hits home for two reasons. One, it’s the very first episode of my all-time favorite show and the introduction of Santa’s Little Helper to the Simpsons canon and two, it hits on one of the most important feelings during the holiday season. Now the first part is big because I recently got a dog and at first I wanted nothing to do with her and now I can’t leave her alone much like Homer in the episode. The second part is the feeling of major stress. Homer has no money to buy his family gifts for Christmas and he feels like a terrible father. We’ve all been there (or are still there, myself included) where you’re strapped for cash and you don’t want your loved ones to know they’re gonna be in for a disappointing Christmas.

In a last ditch effort, Homer and Bart go to the dog track in hopes of winning some money to buy present. He bets on a greyhound named Santa’s Little Helper because he thinks since it’s the holiday season he’s a sure fire ringer. And of course since it’s the holidays, he comes in dead last. Thinking all is lost, Homer and his son head home only to see Santa’s Little Helper’s owner abandon him, and he quickly becomes attached to Bart. Homer at first refuses to adopt the dog but is quickly swayed by a lick on the cheek. Thus, the dog becomes the perfect Christmas present and Homer is a hero.

This episode is one of The Simpsons more serious episodes and it really grounds Homer as a guy just wanting to give his family the perfect Christmas much like we all do. It’s the perfect reminder that there can be such a thing as a Christmas miracle.

Editor’s Note: Episodes of the Simpsons are nearly impossible to find online, but this sped up, sepia-toned version of this episode will have to do.

This was one of the more difficult choices I’ve had to make for this series. I was originally going to choose the Festivus episode of Seinfeld, but I was beaten to it. Then, I moved on to the next episodes on my list, but found out that I really couldn’t decide which I liked more because they were all great in their own way. These classics were produced by the same series, South Park, and each is fantastic in their own right.

Eventually I narrowed it down to two: Mr. Hankey, the Christmas Poo and Woodland Critter Christmas. Only on The Main Damie, would I have to choose between a talking piece of poop and Satan-worshiping small animals. After careful consideration, I decided that the episode that introduced a new song in to the Christmas landscape was my favorite of the bunch. My No. 1 sitcom Christmas episode stars the happiest piece of human feces ever created, Mr. Hankey.

The episode itself is one of a handful that established South Park as a much-watch with my generation. It was the perfect combination of biting satire and seriousness, which was the staple of first few seasons of the show. Obviously, the episode doesn’t work without its main character, which was influenced by the overly positive character that populated the old stop-motion Christmas specials, Rudolph the Red-Nosed Reindeer and Santa Claus is Coming to Town. Matt Stone and Trey Parker showed that the messages from those animated classic were so generic that you could replace them with a piece of crap (literally) character and the story would play out the same. It was utter brilliance.

There isn’t much more to say about this classic, so I’ll let the man himself take it away: 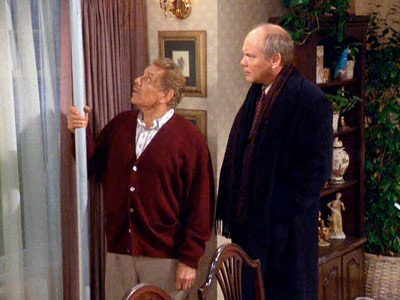 Seinfeld doesn’t spend too much time on gushy stuff like Christmas Spirit or being nice to each other… ever.  No, even the few times they’ve had episodes that revolved around Christmas, they spent more time on George’s cheapness (“The Red Dot”) or Elaine’s nipple (“The Pick”).  In this episode, however, a number of things come to light; more specifically, we get to see the holiday created by Frank Costanza: Festivus.

In the later seasons, time and time again, each episode was crammed with classic A, B, C, and sometimes D storylines, and this one is proof of just how great the writers were able to weave them all together.  While Jerry is dealing with a two-faced girlfriend (in certain light, she’s gorgeous while ugly in others), George is trying to scam his coworkers out of Christmas gifts by “donating” for them to The Human Fund.  Meanwhile, Kramer goes back to work for H&H Bagels after a decade plus-long strike and Elaine is stuck dodging the guy from the stationary store and a couple of other guys that work at the OTB.  All of these are plotlines that don’t coincide until the final scene at Festivus dinner.

Frank Costanza is, to say the least, an eccentric character, and the holiday he made up is so off-the-wall that it could only be a Seinfeld creation.  The dinner scene is what makes this episode so amazing and The Airing of Grievances should be implemented into all Christmas traditions.

Which Sitcom Christmas Episode is your favorite?  Vote in the poll below or voice your opinion with a comment.