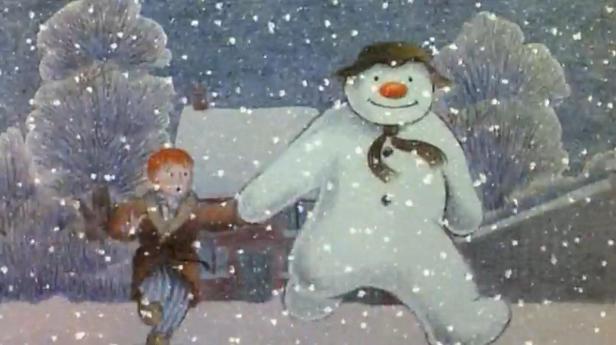 In the United States, Frosty the Snowman is one of the most beloved holiday specials that television has to offer.  Across the pond in the UK, they have a similarly-themed cartoon called The Snowman, which plays out like Frosty’s more sentimental cousin.

Told without dialogue, The Snowman is almost a picture book come to life.  During a snowstorm, a child goes out into his backyard and builds a snowman.  There’s no magic hat like Frosty, but at the stroke of midnight the snowman comes to life and the boy runs out to join him in play.  The boy takes his creation on a tour of the house, showing off the modern conveniences a snowman might find interesting: television, Christmas lights, even his parents’ clothes.  They even manage to take a joy ride on a motorcycle, all during the cover of night.

Eventually, because it’s Christmas and it’s magic, the snowman takes flight with the boy in his care.  They head off, high over the villages and up to the North Pole where they meet up with a bunch of other multicultural snowmen and, of course, Santa Claus.  They take part in some revelry and the boy even receives a scarf from Santa before they must return home.

The Snowman is a very quiet film, both literally and figuratively.  The art is phenomenal, with the book feel still intact even as the pictures move.  It’s astonishing how well the artwork is during key scenes like the motorcycle ride and the flight around the world.

As there is no dialogue, the music plays a major part.  Perhaps not as obvious of a use as Peter and the Wolf, the music still manages to breathe life into each character and carries most of the emotional weight on its shoulders.

It may come off as the same basic premise as Frosty the Snowman, rest assured that The Snowman is its own separate entity.  There’s room for both classics on Christmas and if you haven’t seen it, you should take the time to do so.  The full video can be found here.