It is tradition among even the darkest dramas on television to have an element of humor in its writing and storytelling.  Breaking Bad, The Sopranos, even Mad Men all have a deft ear for both comedy and drama; it’s this push and pull of tension that makes these shows so highly regarded.  In the first episode of HBO’s new series, True Detective, humor fails to find a place within the runtime.

Even as gory as The Walking Dead or American Horror Story can be (and as the former often frays into the bleakness True Detective owns), their sci-fi/ horror elements allow the respite of impossibility; as much realism as you can put into the shows, they will always be fantasy and in that, there is a comfort allowed to the audience.

To describe True Detective as bleak is, no doubt, an understatement.  While the show features two lead characters with two varying views of the world, the character that skews towards nihilism seems to have a greater effect on the overall tone of the show.  Can a show this dark, this bleak sustain viewership?  In the case of True Detective, time will tell, but with a stellar cast and a nevertheless intriguing storyline, it has a lot in its favor.

We’re introduced to Louisiana Homicide Detectives Martin Hart (Woody Harrelson) and Rustin Cohle (Matthew McConaughey) three months into their partnership when they are called out to investigate a ritualistic slaying of Dora Lange.  The story is framed by interviews in 2012, as the two detectives are asked to recall the investigation for police records and while most of the plot in the first episode revolves around investigating leads and clues, much like any other procedural cop show, the true conflict is centered around the philosophies of the two main characters.

Harrelson’s Martin Hart is a great “by-the-book” detective.  He does his paperwork, he curbs his expectations of the case, and he more or less has his job down to a science.  I wouldn’t go so far as to call him straight-laced, but he keeps his police work tidy; he’s more interested in getting it right than being flashy.  It’s a welcome departure to see Harrelson play the straight man.  As far back as Cheers and as recent as Catching Fire, he’s been the loose cannon and it’s nice to see him play somewhat against type.

The antithesis of Hart is his relatively new partner Rustin Cohle, another role in the McConaughey Revival Tour.  Cohle is probably the smartest man in any room, but he’s also the one with the biggest chip on his shoulder.  His mind is similar to one that you would find with a character from Criminal Minds.  He obsesses about motives and murder patterns and just the little details that go with every crime scene.  The one feature of his bare bones apartment is a stack of true crime books at the side of his mattress.  He treats his police work like old hat: the details he sees in everything comes to him so naturally that he virtually condescends to the people that don’t see the world the way he does.  He’s a nihilist, but you almost get the sense that he wishes that there was a god and that we were on the doorstep of end times.  Just so he can be done with everything and everyone.

While Woody Harrelson is great in his role, it is McConaughey’s performance that is worth more ink; perhaps it is refreshing to see McConaughey return to roles that actually look like a challenge for him.  With so many years meandering around the purgatory that is the romantic comedy genre, you almost forget what he is capable of as an actor.  Luckily, whether he fired his agent or just decided that chick flicks offered him very little, he seems to be back on track and this could possibly be his best role to date.

It’s not just the scenes taking place in 1995.  It’s also the 2012 scenes that make the performance so spectacular.  There’s a gap between his psyches of the two eras and while we don’t get a sense of why it is so, it will obviously be revealed to us in due time. 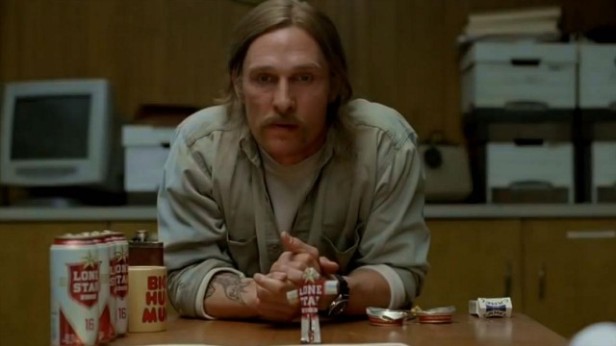 Overall, I really enjoyed True Detective. It’s moody and dark and it’s held up by two actors at the top of their game.  I’m not a big fan of procedurals, so I do have concerns about getting bogged down in the step-by-step nature of the genre, but with a short run, it may be easier to swallow.

One thought on “True Detective – “The Long Bright Dark” Review”