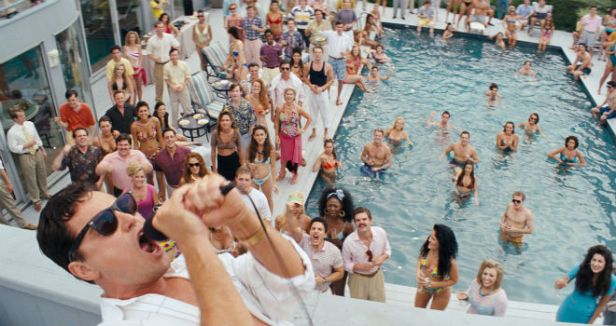 One of the first few things we see in The Wolf of Wall Street is a red (make that white) Lamborghini tearing ass down the highway and from that point on, the film never lets off the gas.  It’s a kinetic look at some terrible people doing some insane things, and it’s that pacing that makes The Wolf of Wall Street the best movie of the year.

A lot has been made about the content of this film, the story of Jordan Belfort and his time with Stratton Oakmont.  I find it odd that people have a problem with a story that is not condemning of his actions, as this is essentially the same story arc as Scorsese’s masterpiece Goodfellas; a film in which the protagonist Henry Hill is complicit in a number of murders and various other criminal activities.  Are we more comfortable with our criminals being admitted gangsters rather than posing as legitimate businessmen?  Or, after the collapse of 2008, are people still hypersensitive about shady wheeling-and-dealing from the boys on Wall Street?  Regardless of the reasoning, to me, making this a cautionary tale would be dishonest.

Something tells me that Jordan Belfort would do it all over again if he could.  He makes a cameo in this film, so I don’t think he’s actually embarrassed of his exploits.  The moral of the story, despite an absence of remorse, is still that the kind of crap he pulled can only pay off for so long.  As his father in the movie (played by Rob Reiner) says, the chickens always come home to roost.  Just like Henry Hill, while it was fun while it lasted, the fun always seems to disappear in the end.

I don’t know much about the inner workings of the stock market, but it seems like there is a thin line between what is legal and what is illegal, with very little of it staying on the straight-and-narrow side.  Even when Belfort is fresh-faced and off the bus from Queens, the advice given to him by his mentor is dodgy at best.  In an amazing short performance by Matthew McConaughey, he speaks the praises of masturbation, cocaine, and keeping the money in the game by any means necessary.  It’s this framework that Stratton Oakmont and Belfort’s eventual fortune is built upon.

The film is an impressive display of arrogance and over-indulgence.  One would surmise that had Caligula been born in 1962 like Belfort, this would be his story.  Prostitutes, drugs, alcohol, and frivolous spending, these are the things that Belfort props up as his version of the American Dream.  What fuels his life is what fuels this movie and once it gets going, it continues to go 100 mph.  Scorsese directs this film with such a sustained energy that keeping up becomes part of the viewing experience.

Leonardo DiCaprio has a lot to do in this film.  It’s a truly physical performance that is unlike anything we’ve seen him in.  From rousing speeches to flopping around in a Quaalude-induced paralysis, DiCaprio gives an exhausting performance and might be his best role to date.  His work with Martin Scorsese is now reaching similar levels that Scorsese had with Robert De Niro.  We are now more than ten years into the collaboration and, arguably with each passing movie, it continues to improve.

The supporting cast is just as good, with now two-time Academy Award nominee Jonah Hill leading the way.  He’s essentially the comic relief, going completely gonzo for a performance where he’s doing some form of drugs in every scene and flashing fake pearly whites.

The breakout star is obviously Margot Robbie, the Australian actress that plays Belfort’s second wife, Naomi.  Showing plenty of skin, Robbie scorches on screen, and while the Brooklyn accent maybe border on the cartoonish, you have to give her credit for going from Australian to Bay Ridge without a hint of falling back into the old.

You’re not supposed to like Jordan Belfort in this film; if you do, you’re probably a sociopath that counts “I Hope They Serve Beer in Hell” as their favorite book ever.  While the film doesn’t indict Belfort and his cronies on the things they do, it’s impossible not to gain some sort of pleasure out of watching the rise and fall of Stratton Oakmont.  It’s ridiculously fun and completely off-the-wall and the best movie of the year.

One thought on “Goodbrokers – The Wolf of Wall Street Review”