Noah gets released this week, and if a really large boat doesn’t get you excited, then Russell Crowe in Robin Hood mode surely will. Or it won’t. I don’t know.

Anyway, Noah is based on a little book called the Bible, which seems to get rebooted more than anything else. There are some crazy characters and stories in it. Few make any sense, but there’s surely a bunch of stories that need to get the film adaptation treatment ASAP.

Guess what: for all the prudishness that religion thrusts upon us, that thing is loaded with some freaky sex. And Lot has his fair share of kink.

Lot raised a family in Sodom, which was probably like living in Detroit about 15 years ago. Lot’s a nice fellow, sort of, so when two angels roll into town looking for a place to stay, Lot plays host to them. The thing about Sodom, however, is that it had a worse rape culture than the United States (or India, for that matter) as, during the night, basically every male resident shows up at Lot’s door looking to gang rape those two angels. Because you haven’t had forced butt sex, until you’ve had forced butt sex with an angel. Lot wasn’t about to throw his guests to the wolves, so he did the only rational thing he could think of: offered his virginal daughters to the mob to do with them as they wanted. But the mob REALLY wanted to bang those two angels, so they declined.

The angels then went into vigilante mode and blinded all that tried to enter the backdoor. They then brought Lot and his family to safety before they lay waste to the entire city. Stupid Lot’s wife, though, looks back at the scene and is instantly turns to salt. That’s where the story continues to get weird.

After watching Sodom burn, Lot’s daughters assume (I guess) that this was happening all over the world and that they were the last survivors. Wanting to save mankind, the two daughters devise a plan to make sure a new generation will live: get dad drunk and screw his brains out. So they do. They rape their dad… Yep. 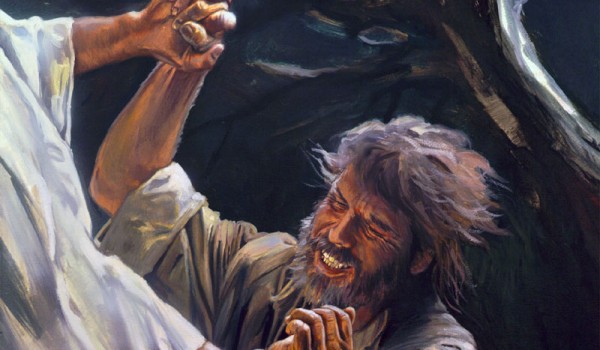 A popular idiom in the world is “don’t spit in the face of God”, but apparently Jacob didn’t care too much for that saying, because Jacob did one better: he wrestled the shit out of God… and won!

Jacob’s story before the fateful wrestling match is kind of standard for Old Testament stuff: marrying cousins, screwing over his brother, visions of Heaven and ladders, etc. Then, all of a sudden, God (or an angel, depending on the translation) totally sneaks up on Jacob and puts him in a headlock. And so they fight. All night.

When God figures out that Jacob is some kind of badass that he can’t beat, He totally cheats and dislocates Jacob’s leg with a simple touch of his finger. Jacob must eat lightning and crap thunder, though, because he does not yield and manages to get God to say the biblical version of uncle, which is to bless him. Jacob is then given the name “Israel” and the Intercontinental Title.

Whether you go the Rocky route or the WWE-produced route, this movie has to star The Rock as Jacob. I’d prefer going with the underdog story and have Jacob have to overcome serious odds in order to win a fight with Him. Make it real inspirational shit and give it to Ron Howard. Smells like $100 million to me.

Poor, poor Job. If there’s ever an example of God being just an absolute dick, it’s the story of Job. Job’s a pretty great guy: a family man, he lives a prosperous, pious life until God and the Devil decide that their life as all-powerful beings is pretty boring, so they play a game. The Devil bets God that Job is only faithful to him because his life is pretty nice and that he wouldn’t be that way if his life sucked a whole lot. Apparently, God is like Michael Jordan (a god in his own right), because he just can’t say no to a little wager, so he decides to beat the ever-loving shit out of Job, metaphorically, of course.

God decides that Job has had too much of the sweet life, so he takes everything: his family, his wealth, and even his health just short of death. Job, the Old Testament’s biggest doormat, can’t help but loving the very being that is doing this to him, so God wins the bet. Great for Job, because God gives him everything back and lets him live to watch his apparently hot daughters and sons grow (and probably banged a couple of his daughters because that shit happens A LOT in the Bible). But you can’t help but think the whole affair put a major chip on Job’s shoulder.

The story of Job almost sounds like 12 Years a Slave, to an extent. You’ve got a prosperous main character that suddenly has the rug pulled out from under him and experiences a ton of shit that would kill most of us, so give this emotionally draining story to Steve McQueen (the other one) and maybe even put Michael Fassbender in the lead role.

You’ve probably heard about Samson and Delilah and maybe that Samson was a super strong warrior that got his power from his hair. That story, and how Delilah totally screwed him over by cutting it all off, is literally the least interesting thing about the story of Samson.

There probably isn’t a bigger dick in any part of the Bible than Samson. Essentially, Samson’s existence is simply to be the Philistines’ worst nightmare, as he kicks the shit out of them every chance he gets. First, he decides to make a wager with his groomsmen (all Philistines) for them to guess a riddle in exchange for garments, so they go and threaten his soon-to-be-wife with burning if she doesn’t tell them the answer. So she does and in order to pay the wager, Samson kills 30 Philistines and takes their garments. After that, Samson finds out that his fiancee’s father has given his future wife to another man. Samson, the hot-headed mess he is, ties torches to the tails of 300 foxes and let them loose in a Philistine village. The Philistines retaliate by burning his wife and her father. He kills a bunch more Philistines, and a bunch more (this time, with the jawbone of an ass), and just spends most of his time in the Bible beating up people and killing Philistines.

That is, until, he meets Delilah, who is paid by the Philistines to figure out the source of Samson’s power. After a few attempts to figure it out, and failing, Samson simply offers it up: his hair. Naturally, she cuts his hair and hands him over to the Philistines, who blind him and turn him into a slave. He gets the last laugh, though, as he knocks down a Philistine temple and winds up killing a few more Philistines before he dies in the collapse.

For some reason, I can’t think of anyone better for the role of Samson than Mickey Rourke in full-on Randy “The Ram” mode. Though, Samson’s fits of rage gives us an opportunity to see Nicolas Cage go all Nicolas Cage with, no doubtedly, some crazy ass hair.

We all know David as that underdog dude that slayed the mighty giant Goliath with nothing but a slingshot, but that only tells part of the tale of David and, quite frankly, that’s where his story ceases to be all that charming.

The original Cinderella story, David eventually went on to become a full-fledged sociopath. Among some of his exploits during his lifetime, he became the reason for the wedding registry, as he gifted 200 Philistine (again!) foreskins to King Saul in order to marry his daughter, Michal, when the dude only asked for 100.

That story isn’t the reason why I think he deserves to be adapted into a movie, though. No, for me, the more fascinating story to me is when he saw Bathsheba. If you’re familiar with the Leonard Cohen song “Hallelujah” you’ll be familiar with this line: Your faith was strong, but you needed proof / you saw her bathing on the roof. This alludes to the first glimpse David caught of Bathsheba. Apparently, David was out catching some sun at his own crib when he caught an eyeful of Bathsheba soaping up her pair of goliaths and David got an instant royal boner, so he did the only thing he thought rational: coveted the hell out of that neighbor’s wife.

Unfortunately for David, his swimmers are strong and Bathsheba, whom was already married to a soldier named Uriah, gets all knocked up. David’s brilliant plan to hide this (in the days before Maury) was to have Uriah called back from war, so that he may bed his own wife and cover up who the real father was. Uriah, being psychotic, says he can’t stand to plow his wife when his friends are out fighting a war without him, so he goes back. David, again, being king, orders Uriah to be placed on the front lines, so that he may be killed. And he is.

David sounds like he’d fit right into a Coen Brothers’ film. He’s quite plainly a horrible person doing horrible things and they seem to eat that stuff up. Personally, this can go as dark as Blood Simple or as slapsticky as Burn After Reading, but I’d put Joaquin Phoenix as King David and Thandie Newton (hey, remember her!) as Bathsheba.

One thought on “5 For Friday: 5 Crazy Ass Bible Figures That Need Their Own Film Adaptation”