Westeros is a brave new world after the events of last week.  For those of us that haven’t read the books, the possibilities of the next few episodes are endless, so each episode is a learning experience of character motivations and larger story arcs.  Here’s what I learned this week:

Maybe? Honestly, if I read the books or dared to spoil it for myself, I could find this one out on my own, but this is the way I’m leaning. Talk about a total power move by Tywin, the guy that always seems to have a scheme or two up his sleeve. He seems like a guy that enjoys pulling the strings from behind the curtain and I think it was becoming abundantly clear that he could not control Joffrey, simply because he could not predict what he was about to do next. Knowing Tommen would be next in line, Tywin has more than enough time to groom Joffrey’s younger brother into a “great king”.

Of course, the other half of me thinks it was Old Lady Tyrell. If there’s another person that plays the game with an eye on the big picture, it’s the part played by Dame Diana Rigg. It’s possible that the move was simply to keep Margaery away from a lifetime of being Joffrey’s wife; maybe they’ll just set it up that she’ll be Tommen’s wife when he comes of age. 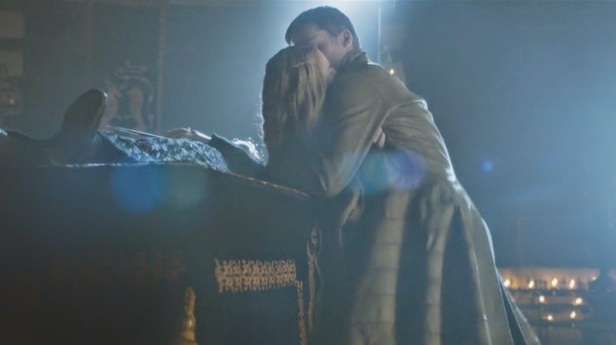 If Jaime Lannister and I grew up in the same time period, he would know that all women love three things: men in kilts, Southern Comfort, and Chris Isaak’s “Wicked Game”. Unfortunate for Jaime, the special bond twins have doesn’t clue him into the fact that forced penetration in the vicinity of her dead son is not on the short list of Cersei’s turn-ons. Granted, she’s down with some Aryan-brand incest, but the funeral of her eldest son, King Douche or otherwise, doesn’t turn on her lady parts like a faucet.

By all accounts, this scene plays out far rapier than it does in the books, so it’s an odd character point for Jaime, who has done much to redeem his reputation in recent episodes. Sure, he’s pushed a kid out a window with full intention of the fall killing him, but child murder is forgivable. Acting out the words to a Robin Thicke song was probably frowned upon in Westeros as well as America.

Imagine if John Wilkes Booth never killed Abraham Lincoln. That’s a pretty great alternate reality. Now imagine that, instead of resting quietly in his grave for all eternity, Lincoln spent the next few years touring the country, showing off all the slaves he freed. History may still have written Lincoln as a hero, but it may have come as a side-note that he was a pretty big dick, too.

Now, it may be argued that Daenerys is doing something noble, and true, she’s actually freeing slaves; that’s pretty cool, but she is freeing slaves for the purpose of bolstering her army. That’s a lot more self-serving as the Mother of Dragons would lead you to believe. Of course, she’s not forcing anybody to join her, but she’s leaving every city she visits in utter ruin without setting up some sort of unemployment plan for the newly out-of-work and homeless few that choose to not follow her. “Short-sighted” is the nicest way you could describe this course of action. Her destructive ways kind of leave these people with little to no choice: they can either join her army and have some food and a purpose or rot in the desert, watching their former homes char to the ground thanks to the dragons.

3 thoughts on “3 Things I Learned From Game of Thrones: “Breaker of Chains””