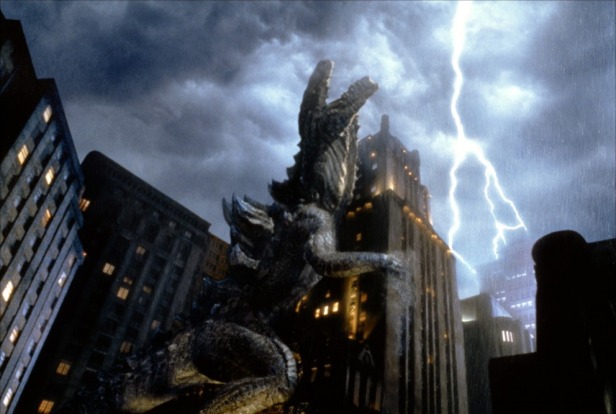 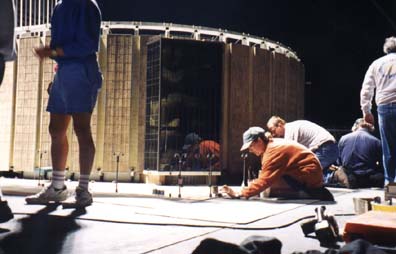 Madison Square Garden is a pretty big landmark within New York City, but in terms of movies, this is probably the most it has ever been featured, except maybe for that movie where Whoopi Goldberg coaches the Knicks.  In Godzilla, MSG acts as a nest for Godzilla, as s/he rapid fires babies into the cheap seats out her mommy hole like an AR-15.  Why is it featured?  To be honest, Godzilla seems to be the only movie in history that chooses not to feature more obvious landmarks, like the Empire State Building or the Statue of Liberty.  Instead, we get the Chrysler Building and the place the Big Apple Circus calls home.

Otherwise, I guess, you can sort of conceivable think that it’s the only structure wide and tall enough to hold Godzilla’s mighty size (or that it slightly resembles a bird’s nest), but the monster’s scale fluctuates so damn much during the whole film that Central Park would have made more logistical sense.

That’s right, even though the writers of this film have complete carte blanche when it comes to every single goddamn character, they don’t make it easy on themselves.  Broderick could’ve been a scientist in just about any field: radiation, reptiles, paleontology (if you just want to drop the whole entire charade that this isn’t a Jurassic Park ripoff), or fuck it, make him just some dude that’s in the wrong place at the wrong time.

Rather than make sense, Broderick’s character is a worm scientist studying worms in Chernobyl.  Now, I get the Chernobyl thing, but until those worms start terrorizing shit all over the former Communist Block, Broderick’s knowledge is useless.  Throw in the fact that the government’s plan is basically seeing how many more nukes it will take to kill Godzilla, rather than anything that requires any amount of thought, and Broderick is just a useless dick.  Just like real life. 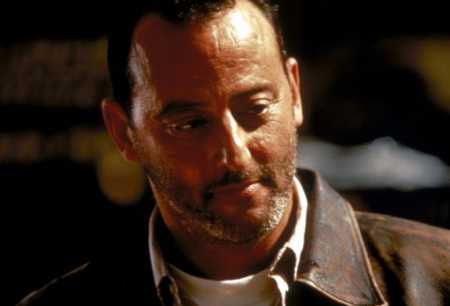 French people, amiright?  That seems to be the attitude of this film, even though it takes place in a pre-Freedom Fries America.  In case you weren’t aware, Jean Reno plays a Frenchman; and he’s very French, so they make sure that they hammer that home.  Besides arming him with the super French first name Philippe, he calls a donut a croissant and is just looking for some French roast coffee.  Get it?  Because he’s French. 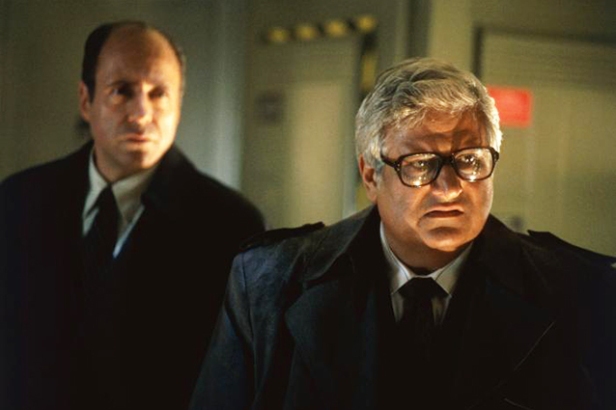 In one of the saddest jokes in the film (sad because it’s hacky, not because he died), the movie decides to pay tribute to Roger Ebert and his sidekick Gene Siskel by making Ebert the mayor and Siskel his aide.  Was this trying to curry favor to the most trusted name in film reviews?  Probably, but they should’ve concentrated on making the movie better, methinks, as the man still managed to give this piece of shit 1.5 stars.  In a movie, chock full of cringeworthy comedy, this one takes the cake.  Two thumbs down!

1.  The Female Lead Was Played By Some Woman

Quick: name the woman that played the main female character Audrey in Godzilla.  It’s not Monica Potter; that was Con Air.  It’s not Anne Heche; that’s Volcano.  It’s not even Helen Hunt, though her ex-husband, Hank Azaria, is featured prominently.  It’s Maria Pitillo.  Does the name not sound familiar?  Then you must not have watched the last few seasons of Providence, because she was all up in that shit.

If you can call her role in this film a “make-or-break” role, then Godzilla is the Bane’s knee to her career’s Batman’s back.  It’s amazing to me that Pitillo got the role.  I mean, it’s not exactly a role of a lifetime, and she’s not the only thing wrong with the film, but I’ve never seen someone have such an entirely nothing career both before and after such a tentpole movie like this.  And it’s not like she was a fresh-faced up-and-comer.  She was already in her 30’s, which may as well be her 50’s according to Hollywood.  She’s a generically attractive 90’s chick with bit parts in a variety of TV shows; as bad as this movie is, it’s the best thing she’s ever done.

I also realize that this is Nic Cage Month and Godzilla has nothing to do with Nicolas Cage, but I can fix that.  Let’s pretend that Nicolas Cage was in Godzilla.  How much more awesome would that be?