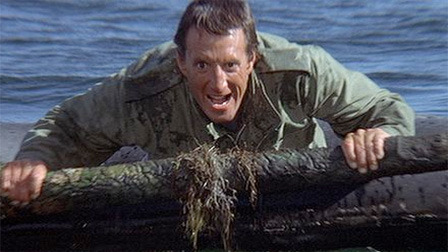 Jaws 2 is an unnecessary sequel in the grand scheme of things, but I suppose if you’re going to make a sequel, one must kick it off.  In this scope, Jaws 2 is a serviceable sequel, especially when you compare it to Jaws 3D, which takes the leap into the ridiculous.  There is a point, however, when Jaws 2 does itself a disservice, and it all has to do with Martin Brody.

If Roy Scheider didn’t do a second Jaws film, then it’s quite possible that it wouldn’t have existed, so there’s no wonder that the events would surround Chief Martin Brody.  It’s obvious, though, that Chief Brody isn’t the same.  He’s paranoid since the events of the previous film, so much so that you tend to wonder why he’s still doing what he’s doing on Amity Island.  A saner man would be a mailman, and that’s exactly the problem: Chief Brody, in Jaws 2, is out of his fucking mind.

That isn’t the problem, in terms of the plot.  No, the problem is the fact that he’s fucked in the head, but he’s not wrong.  Everything that Brody fears after Jaws comes into fruition in Jaws 2.  Take, in a vacuum, the scene in which Chief Brody thinks he sees a shark terrorizing the beach in Jaws 2.  He sends the beachgoers into a frenzy until he stands on the beach and unloads his revolver into the water.  It winds up just being a school of bluefish.  The scene would be a horrifying testament to how far Brody has sunken into his own paranoia, but the fact the shark eventually shows up retroactively justifies his actions.

Remember the scene in Jaws when they think there’s a shark, but it just happens to be a couple of kids with fake shark fins?  Those kids barely made it out of that little prank alive; you put Jaws 2 Brody on that beach, and he’s murdering two little pranksters.  That’s fucked up.

Jaws 2 just works to confirm all of Brody’s paranoia.  If movies were a representation of society, Jaws 2 would be the vaccination debate, Chief Brody would be Jenny McCarthy, and Son of Jaws would be Jonas Salk* rising from the grave to say that Jenny McCarthy was right.  It’s a world in which whooping cough makes a comeback and we have to deal with Jenny McCarthy smug face as she serves us humble pie.

There’s no secret that Jaws 2 has to deliver on supplying a shark to the story, but there’s an alternate universe somewhere in which there’s not a single shark in Jaws 2 and the movie is more about Chief Brody coming to terms with his Post-Traumatic Stress Disorder after he watched Quint get eaten.  It would be a far different, yet possibly more interesting, story.    Then again, we probably wouldn’t get Jaws 3D then, and I wouldn’t trade that movie for the world.

*This is about the third time I’ve referenced Jonas Salk in an article.  I will continue to do so until that reference ceases to be awesome.

One thought on “Jaws 2: The One Where Chief Brody Goes Insane”