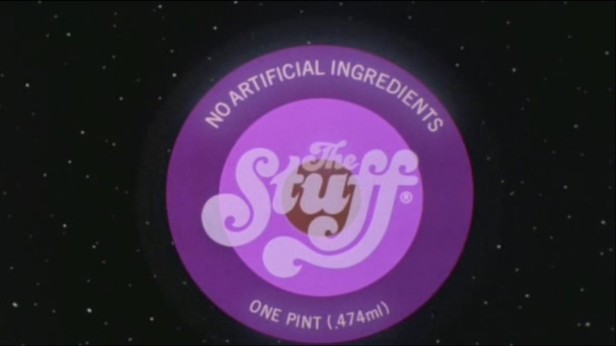 Synopsis: “The Stuff” is a brand new dessert craze that’s sweeping the nation, but it might not be exactly what it seems…

The Stuff is full of a lot of promise, but when all is said and done, it’s just a bunch of empty calories. Get it?

We’re talking about a tale of two movies. The first half is interesting, as a lot of time in the beginning is actually dealing with the kid in the movie. Despite the fact that the kid can’t walk and act at the same time, the scenes with his high-on-The Stuff crazy parents are quite riveting. It kind of reminds me of the scenes between the kid from Troll 2 and his parents, which leads to the scene where he pees on all the food. Unfortunately, the kid in this doesn’t piss on The Stuff, but he does go HAM on a grocery store, which is easily the best part of the entire movie.

The second half I like an uninteresting John Grisham movie, where it’s a whole lot of investigation and very little Invasion of the Body Snatchers, which the first half seemed to set up. Sure, there are some decent effects with The Stuff as it becomes more of a Blob sort of force, but it all is just so mediocre. It’s not even all that fun to make fun of.

While there is not all that much blood in the film, there are actually some pretty good effects, given the era and the subject matter. The film makes decent use of the rotating room we see in A Nightmare on Elm Street and there sure is a lot of practical effects of people exploding. Not bad.

This one is not scary in the least. I guess this is supposed to be satire, but it seems to have a hard time deciding what it wants to skewer. Is it an anti-drug movie? Is it anti-commercialism? Probably both, but it’s a little too unfocused to really drive any sort of point home.

Aside from some decent effects and some tongue-in-cheek humor, The Stuff does just about everything as mediocre as possible. It’s not so-bad-its-good and it’s not even unwatchable. It just sort of does its thing without leaving much of an impression on you. 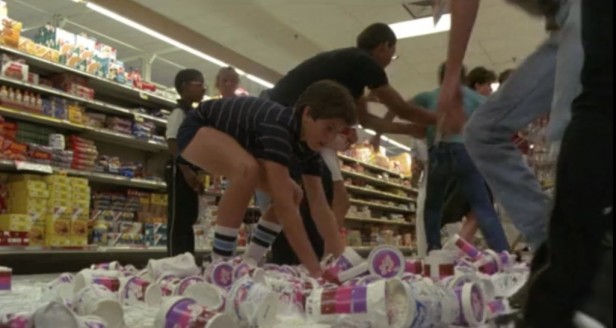