If you’re reading this site, then you’re probably a lot like me, which means you’d probably be worth dick in any apocalypse situation that doesn’t involve zombies. Sure, you may know that the best way to kill a zombie is to remove the head or destroy the brain, but you’d probably be at a loss if your plumbing needed anything more involved than a plunger. In the modern world, you can just give a call to someone with expert know-how on the electrical or plumbing of your home, but when that sort of luxury doesn’t exist anymore, how long will it take before you start shitting into a pool?

We all fantasize about being the hero in stories that require heroes in our minds. If you’re a fan of The Walking Dead (that other apocalypse show), I’m sure you’ve picture yourself in the shoes of Rick or Michonne or Daryl much more often than you imagine yourself to be Eugene. If we’re being honest, we all have more in common with a guy that pretends to be useful than a badass with a samurai sword. Hell, most of us, if we found ourselves the lone survivor of a plague of some sort, we’d probably spend more time peeing our pants and crying than we would plant food in order to survive.

Such is the life of Phil Tandy Miller, the eponymous “Last Man on Earth” and arguably the biggest shitbag that made it out of the apocalypse that claimed so many lives. Early in the series, he truly believes that he is the only person alive, as he travels the country searching for survivors. It’s not long before he retreats back to his hometown of Tucson, setting things on fire for fun and swimming in a kiddie pool full of margarita. Phil’s lazy, shortsighted, and not very useful in a survival situation (he can’t even fix a door). And you know what? He’s exactly like us.

Phil’s outlook on life is never affected by the new world in which he lives. He is still completely shallow and selfish as we can only assume he was before the world went to shit. It even stands to reason that the only reason that he went looking for anyone else is that he was terrified to live in a world in which he’d never have sex again. Even in the apocalypse, every one of Phil’s actions seems motivated by his desire to have sex, and while we can scoff at him being so despicable in his attempts to assure himself a lay, it’s not exactly that difficult to relate to his motives.

What I absolutely love about The Last Man on Earth is just how terrible of a person Phil can be. While the people around him are struggling to make their lives feel somewhat normal, Phil seems only interested in manipulating people into getting what he wants. More often than not, it blows up right in his face. In one season, we’ve seen him marry a woman he despised just to have sex, drove another guy out to the middle of the desert to leave him for dead, and steal a cow just so he could get credit for finding it again. While everyone around him has kept some sort of civility that is familiar to them, Phil went to his basest form in no time.

In the same way you root for and against the group in It’s Always Sunny in Philadelphia, you root for and against Phil. You’re complicit with him when he climbs up a billboard to send any new arrivals as far away from Tucson in possible just so he can have sex with the women he’s already met, and then you just kind of laugh at him when the plan backfires, the ladder falls, and he’s stuck 60 feet in the air and the Arizona heat. We want to see you succeed Phil, but not as much as we want to see you fail miserably.  As Phil Miller, Will Forte manages to create a character that is completely hate-able while never truly crossing the line into awfulness.  He’s not evil; he’s just a schmuck, which is all too relatable. 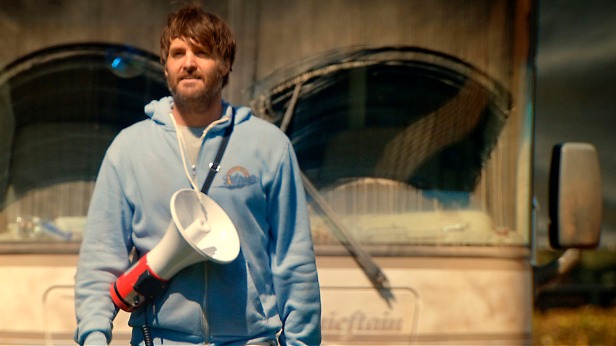 It would be interesting to see what Phil was like before the shit hit the fan. I’d imagine that he wasn’t much different, but to see his selfishness in a different scenario would be interesting. Like, what was he doing to make people miserable when he wasn’t pretending everyone he knew was dead so that he could get a threeway with two women he just met, then pretend to be his own twin brother to cover up that lie? Maybe the whole situation brought the worst out of him. Maybe he was a normal guy in a relationship he didn’t want to be in and a job he hated until everything changed.

While a lot of criticism of The Last Man on Earth comes from the idea that they abandoned the very title after the first episode, I think it works best this way. In theory, a show solely about one man alone in the desert could have been an amazing tour de force, there’s no way it could have sustained itself for even a short season. The first hour sufficed for me, as we watched Phil stoop to the level of Tom Hanks in Castaway and start talking to sports balls and try to chat up a mannequin in the window of a lingerie shop. Now, we get to see Phil fuck up with actual people and make their lives harder than they need to be. Welcome to television, Tandy. You’re officially this generation’s Gilligan.