I missed Nirvana’s rise to fame; I was just too young. Sure, I had probably seen the “Smells Like Teen Spirit” music video a few dozen times when I was a kid, before Kurt Cobain decided to take his own life, but I missed the intricacies of it all: the meteoric rise to fame, the disastrous relationship with the press, and even the importance of Nirvana’s role in the music world.

I was nine in 1994, but I became enamored with their music just a few years later when I bought Nevermind, the first CD I ever owned, with my own money. I was middle school, so I was still too young to identify with a lot of it. I just knew, even at that young of an age, that what I was hearing was special, was different, and as compared to the music I grew up hearing from my parents – the Beatles, Led Zeppelin and even Madonna – it was mine.

This was my first step into true music fandom, venturing out into music I’ve discovered on my own. Before long, Nirvana posters were replacing sports stars on my wall, my hair grew just a little bit longer, and I had a reason to put a walkman on my Christmas list. When I was in seventh grade, my favorite shirt I owned was a Nirvana t-shirt. I loved the shirt, but it made me the subject of criticism.

I was a good kid, got good grades, and never really got into any sort of trouble (re: I was/am relatively uncool). To some people, this meant that I couldn’t appreciate music that was aggressive, raw, and spoke to truths that you couldn’t find across the radio dial. I remember distinctly someone challenging me to name three Nirvana albums. I named every single one of them, including the live album “From the Muddy Banks of Wishkah”, which I had received as a Christmas present that year. So fuck you, kid in my seventh grade English class, who shall rename nameless.

Director Bruce Morgen has created the perfect Kurt Cobain documentary with Montage of Heck, mostly because he lets his subject do most of the talking, through archival footage, audio recordings, and his own art and journal entries. There are a few interviews with family members and close friends, but these are used sparingly and do not attempt to put words in Kurt’s mouth or paint him in any sort of light. The documentary serves no agenda other than to tell the truth about a person that rose to fame quickly, only to let his demons envelope him even faster.

Montage of Heck tells the story of an ambitious young artist that wanted it all, got it all, and was crushed under his own dreams. Few of us ever manage to fulfill every hope and wish we could ever imagine, which is why we all aren’t actors, musicians, or sports stars. It’s tragic to watch someone that has access to everything anyone could ever want, only for it to be all too much. It gives you the sense that there’s some sort of inevitability to Kurt Cobain’s fate, almost that one way or another, this guy was not meant to live a long life. 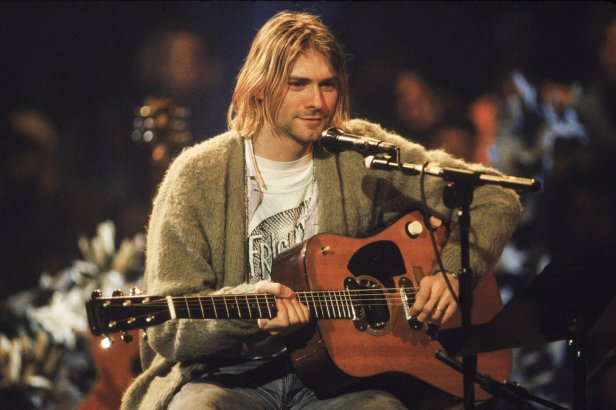 The film itself is, as the title suggests, a montage. Morgen has pieced together a story using little more than what was already provided to him. There are really some amazing things he was able to get a hold of, each of which is able to provide a vivid picture of Kurt and the demons that followed him, even before he picked up a needle. This film manages to hit both the ups and downs of being a Nirvana fan. There are moments where he lets the music play itself out, rumbling over fascinating imagery like animation or journal entries or archival footage. Like all great music, Nirvana is still as fresh as it was when the albums were first pressed in the late 80’s, early 90’s.

But there’s the flip side to it all, the dark side. Morgen doesn’t shy away from showcasing just how much of a mess Kurt was, all the way up until he died. Home movies of he and Courtney Love are tough to watch, especially when Frances Bean comes into the picture. For all the money that they had, there home life was nothing better than you’d expect from a couple of junkies. To watch it, to see them jabber on like idiots or fall asleep while trying to give their infant daughter a haircut, it’s painful, embarrassing, and just plain tragic.

The only drawback concerning this film is the lack of involvement by Dave Grohl. According to IMDB, Grohl was busy doing his docu-series Sonic Highways and by the time he finished, Brett Morgen felt he had enough to make the film he wanted to make. That may be true, but I can’t help but feel that the ongoing feud between Grohl and Courtney Love (who is present in the film) played some part in his absence. Does the film suffer? Not necessarily, but it feels like a blind spot in the narrative to exclude the drummer of Nirvana and one of the biggest rock stars of the past 20 years.

Overall, Montage of Heck is about as infuriating as you can imagine. There’s an inevitability that hangs over the narrative. Maybe it’s because we know where it’s headed, but early on, it seems like the signs of disaster were there all along. Early on, this is my favorite film of 2015 and it might not be close.