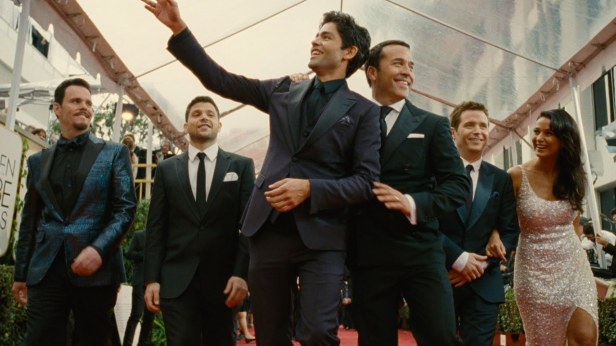 This week marks the release of Entourage, the movie version of the tonally ancient television series that had a few good seasons before it all went so very stale. It was escapism in its purest form, and I’d be lying if I didn’t say I was a fan of it at some point.

Even when I did enjoy it, there were moments that bothered me; it was never a well-written show, and its faults in that aspect revealed themselves in overly contrived plot devices that solved conflicts in a matter of moments. This term is referred to writers as deus ex machina (Latin for “god from the machine”). Basically, it means the writers didn’t know how to solve something, so here comes something out of left field to bail everybody out. Entourage was the best of the best at this, and here’s some of the more telling moments.

5. That Time Vince Made a Stupid Bet, But Then Someone Did Something Even More Stupid

This was kind of one of those circumstanceless episodes that just didn’t really have anything for Vince to do. I mean, he never had anything to do. Most of the movies he was supposedly in were shot between seasons, but this one, his vapid existence in his own life was pretty obvious. What do the writers have him do? He follows a hot chick he sort of knows to a Malibu house where Dennis Hopper is hanging with his old hippie buddies and betting on soccer. Vince just got off shooting a movie that he used his own money to help finance, so of course he should bet some money (that he doesn’t have) on a game that he knows nothing about. Neither does Dennis Hopper, apparently, because his sure thing was pure garbage and winds up losing. Luckily, Hopper still hangs out with a bunch of burnouts because the guy that was supposed to place the bets fell asleep and forgot. What a relief! Looks like moving back to Queens can wait another week.

4. That Time Someone Had to Die In Order For Vince to Get Smokejumpers

If this plot was in Curb Your Enthusiasm, it probably could’ve been quite humorous, but in Entourage, it was a blatant escape from a corner the writers painted themselves into. How does Vinny get a movie from an exec that hates him? Well, the guy is so full of rage that he literally dies. That’s it. Then, the guys callously pull the script from his cold dead hands. Looks like the Chase boys have won again! I’m surprised they didn’t write into the script that Vince bangs Alan Gray’s widow at the funeral. That would’ve showed that guy.

3. That Time Aquaman Wasn’t Going to Beat Spider-man, But Then It Did

Now, in the interest of full disclosure, this may be the best episode of Entourage, for what that is worth. This is the one where the city of Los Angeles is marred with rolling blackouts on the same day Aquaman premieres. Because Vince thinks that the movie is tanking, he decides to slum it and help a couple of hapless nerds get into a more popular kid’s party. It’s actually a well-done episode, as Vince actually shows some sort of humility. That’s taken away from us, though, because apparently the blackouts had no effect on ticket sales! Huzzah! It was just a simple misunderstanding! Aquaman is now the biggest opening film of all-time! Which is quaint at this point when you look at the numbers it supposedly brought in. $116.8 million would make it the 19th biggest opening weekend, and it would’ve only held the title of the biggest opening for three weeks when Pirates of the Caribbean: Dead Man’s Chest opened at $135.6 million.

This was an early season three episode, so it probably took this trend a while to uphold, but with increasing frequency, plot points were often solved by no one doing anything and just letting things fall into assorted laps. That’s fine when the thing falling into a lap is some random star fucker Vince fell into, but for plot devices, it’s basically just the writers saying “And then magic happens.”

2. That Time The Guys Were Almost Late to Cannes, But Then Weren’t

This moment became the gold standard of this trend, so much so that, to me, each of these instances can be referred to as “Kanye’s Private Jet” Moments.

Entourage is a fictional world in which a minor inconvenience like not being able to get a flight out to Cannes in an orderly fashion is seen as drama worthy of a 30 minute episode. If you fault it for this, however, you probably weren’t paying attention to any episode that preceded this one. Entourage found its formula early on: Vinny passively walks around Hollywood and sticks his dick into something while Ari and Eric try to keep him gainfully employed. Meanwhile, Drama and Turtle do stupid things, usually together.

When it had conflict, it was usually quite superficial, like not being able to get a flight to Cannes. But in pure Entourage fashion, it was easily resolved via unforeseen results. You see, it just so happened that Kanye West was just about to board his private jet to take a trip to Europe and, whattya know: it turns out Kanye knows Turtle on some level. Of course Kanye can stop off at France, first. He’s got nothing else better to do. Let’s go friends! Cue the end credits.

1. That Time Martin Scorsese Ruined an Entire Season of Struggles

Season 5 may have been the point where the show started to resemble a perpetual motion machine, but at least there was some sort of arc throughout, no matter how contrived it may have been. The entire season was about Vince trying to rebound from the disaster that was Medellin, and failing at that. Fresh off being kicked off of Smokejumpers (which was shut down, anyway), Vince finally makes good on his ever-looming promise of going back to Queens. All doesn’t seem to be going well for the crew. That is, until the last goddamn minute of the season when Vince gets asked by master auteur Martin Scorsese to play Nick Carraway in his adaptation of The Great Gatsby. This was 2008, years before Tobey Maguire took on the role.

This was my breaking point for this show. I was a fan of its shallowness and occasional humor to this exact moment, and from then on, I hate-watched the shit out of it. The fact that Vince got kicked off a movie, and then got hired off of the dailies of that movie was indescribably stupid. What’s even more stupid is the job is as high profile as a Martin Scorsese film. Fuck you, writers. Adrian Grenier is a garbage actor, and so is Vinny Chase by proxy. So it stands to reason that if he were so bad in Smokejumpers, it wouldn’t exactly be the resume you’d want to usher around Hollywood. But it was, because the writers said it was. That became the unofficial mantra of all character motivation for this show towards the end. Why did this happen? Because it said so in the script.