Which Kind of Junk Food Are You?

Which City Would You Most Want to Live In?

Where Do you Do Most of Your Reading?

None of this matters. You’re Chunk. We all are. Allow me to explain.

The Goonies is a super awesome kid adventure flick from 1985. It involves a treasure map, pirate ships, and Joe Pantaliano. You know: the three things you dream of when you’re a kid. Like most 80’s kids movies, it involves a ragtag group of kids, which always has the token fat kid. In The Goonies, the fat kid is Chunk, and the fat kid is you.

No, I’m not calling you fat; Chunk has more of a personality than just his waistline. You are Chunk because The Goonies is Chunk’s movie, and his experience is that of repression, anxiety, and a thorough desperate attempt to maintain the status quo in his life. This is you. The plight of Chunk is the plight of the working American, the ones that fear death. You. 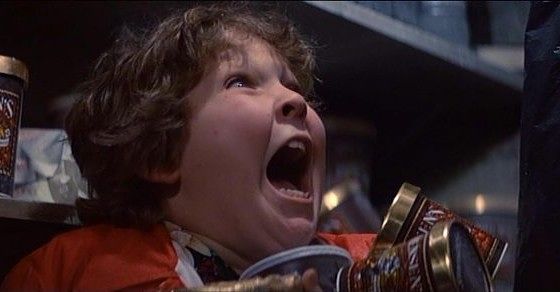 Let’s look at this by looking at the other characters. First of all, we have Mikey, the resident hero. Played by Sean Astin, he’s the one that orchestrates everything, the one that brings out the treasure map and gets this ball rolling. Unless you have some sort of God complex or your own psychology has never evolved passed your id, you don’t identify with Mikey. You may strive to be Mikey, to want to set caution to the wind, deflate your brother’s bike tires and run afoul of the Fratellis, but that shit ain’t the truth.

Mouth is the ego. His nickname represents his own defense mechanism: his quick talk that he uses to repress his true feelings, especially towards Stef. He’s that guy that always has a joke rather than anything of substance to say. In this way, he keeps people out to protect himself.

Data is pure fantasy. He may as well not really exist. He’s the gadgets you think up as a kid that would be cool to have, but exists in a plain of fantasy. He has no real personality, only inventions. That leaves Chunk. As a kid, you probably thought Chunk was a wet blanket, but as you’ve gotten older, you have more in common with Chunk than you do with anyone else.

Of the three parts of the psychic apparatus, Chunk is the super-ego. He’s the one that thinks none of this is a good idea. Chunk fights against adventure. He doesn’t want to have an above average day. He’s just trying to get through life without much pain to it all. And that bites him in the ass. The voice of reason of the group, Chunk is sent to go get help, but runs into the Fratellis anyway. He’s tied up, forced to confess what he thinks are his “sins” of sorts, and gets locked in the same room as a gnarly beast. This is us.

Chunk’s fears are that of change and works hard to keep anything from happening. But it all happens anyway. He gets pulled into the mess without having any of the fun. We fear growing old, but it happens anyway. We try to keep ourselves pristine, but shit happens no matter how hard we try to keep it from happening. He’s taken prisoner and befriends an outcast, which may actually be the one true bond he has. The others make fun of his weight, make him do a stupid dance for their own amusement, so the only person he identifies with is another outcast: Sloth. We fear being left at the corners of life, milling about with the others pushed to the side. Even when he finally saves the day, it’s not really him doing the saving; it’s all Sloth. He’s the Robin in his own story, an inferiority complex in its purest form.

This is you. You, like Chunk, are driven by your fear of getting older and walking into the unknown. You fear being left out of all the fun, while you’re stuck hanging out with the other rejects of the world in a dark cave, shunned from society.

Don’t worry. We’re all Chunk.  Except for George Clooney.  He’s totally awesome and everyone loves him.  Unlike you.

Anthony Del Vecchio has a rudimentary understanding of basic psychology.  Tell him where he screwed up on Twitter.

3 thoughts on “Quiz: Which Goonie Are You? Just Kidding, You’re Totally Chunk.”