What if I told you that the best show on television during this summer season happened to air on the USA Network? Would you call me a lying scumbag, especially seeing as how this summer marked the return of True Detective, one of 2014’s best dramas? I assure you, in this instance, I’m not lying. Mr. Robot, despite its terrible name, is truly television that has surpassed even my own expectations and has since become the lone hour of television I look forward to each and every week at the current moment.

Dare I say that Mr. Robot is the best representation of hackerdom in all of film and television? I mean, this isn’t saying much, despite the fact that the 1990’s were obsessed with what some gifted individuals could find out using bits of code and stolen passwords. Movies like The Net, Hackers, and even a James Bond movie or two just had someone in glasses bang frantically on a keyboard and called it hacking. Mr. Robot gives credibility to a misunderstood art form, much in the way Breaking Bad made it seem like a chemistry teacher could become a crystal meth kingpin. It may not get everything right (not that I would notice), but it gives enough to make it seem like it knows what it’s talking about. Fake it until you make it, as they say.

Rami Malek plays the lead, Elliot, an antisocial loner living in New York, working for a digital security company that caters to one of the biggest conglomerates in the world: E-Corp (referred to by Elliot as Evil Corp). When a hacker group styled after the “hacktivist” group Anonymous tries to infiltrate the company’s servers, Elliot manages to stop the threat, putting him on the hacking group’s radar. They want him to work for them, aptly named fsociety, and help bring down Evil Corp and any other likeminded company with far too much power. Think Project Mayhem, but with computers. Much like Breaking Bad, Elliot manages to get himself in way too deep quickly and the intriguing part of the show is how he has to use his skills in order to bail himself and those around him out of harm’s way. 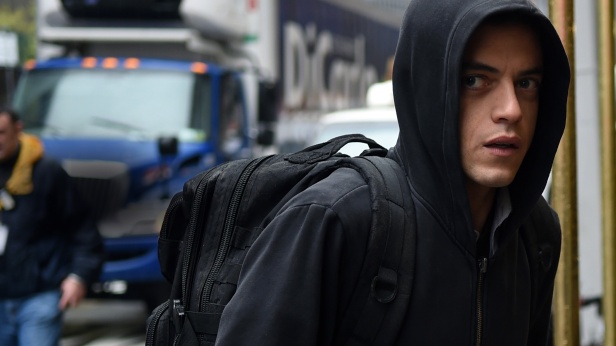 Malek shines in the lead role; he’s fantastic as Elliot: standoffish, nervous, but at the same time, calculating. It’s a star-making performance for a guy that you’ve probably seen (especially if you watched the HBO miniseries The Pacific) and it would be criminal if the show doesn’t get him some attention eventually come awards time. He carries a lot of the weight of the show and it all comes together because he’s so believable in it.

One of the things I love about the show that I don’t see mention quite often is the cinematography. Mr. Robot basically breaks every single filmmaking rule when it comes to framing a shot, and it’s this fact that makes it feel so unique. There’s a lot of use of deep focus shots, white space, and a blatant disregard for the rule of thirds. It makes you feel like you’re watching from the perspective of someone about to snap and it works beautifully.

Mr. Robot was picked up for a second season before the pilot even aired, so that means that we’re not only guaranteed a second season, USA seems to have a lot of confidence in this show. USA Network has done well for itself with case-of-the-week sort of shows like Monk, Psych, and Suits, but this could be a real flagship show for them. Even Christian Slater isn’t that bad in it.