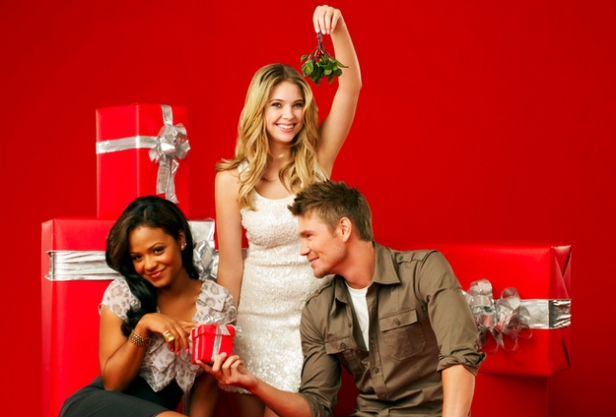 PLOT: After the death of her client, Caitlin, Sloane is visited by the spirits of Christmas past, present, and future – all in the guises of Sloane’s former boyfriends.

Just the other day I was thinking, ‘you know what we need? The hundredth version of A Christmas Carol.’ In all seriousness, Christmas Cupid is a close to a modern remake of the Dickens classic as you can get. The writers stuffed as much modern things and references as possible into this film. It felt like a script that came out of writers room after the head of ABC Family said, ‘ I want a Scrooge story the kids can relate to, but without any of the ultra depressing stuff of the original.’

Christina Milian (Love Don’t Cost a Thing, Grandfathered) stars as Sloane, an ambitious member of a public relations firm, who has become so wrapped up in becoming rich and powerful that she doesn’t really see the world around her. In this sense, she’s supposed to be Scrooge, but outside of the normal millennial selfishness, there’s not much of a similarity between her and the Dickensian villain. Sure she hurts some people, but the wounds are superficial compared to what happens in the classic. And why did they decide to add a love story?

The only saving grace of this movie was Ashley Benson’s performance as Caitlin Quinn, the Jacob Marley of this world. Somehow Benson (Spring Breakers, Pretty Little Liars) finds a nice balance between serious talks with Sloane and making fun of her choices. Even with the limited nature of the script, she found a way to make the audience not hate her character, which on the surface could have been very easy. She has that unique quality that makes you like her no matter how awful her character is behaving. This was true in Spring Breakers as well.

One of the major disappointments of the movie was the underwhelming use of both Chad Michael Murray (One Tree Hill, Dawson’s Creek, Gilmore Girls) and Jackee (227, Sister Sister). Murray wasn’t in the movie enough to be Sloane’s true love and Jackee killed it in every scene she was in but was in so few for reasons that I don’t know. You can even throw Ashley Johnson (Growing Pains, Blindspot), who played Sloane’s only friend, in there as well.It is not a good sign for your movie when a viewer is clamoring for more scenes from the supporting characters because the lead is just not interesting.

Outside of an abundance of drinking and Caitlin becoming an angel at the end, there’s not much to show the Christianity side of the holiday. 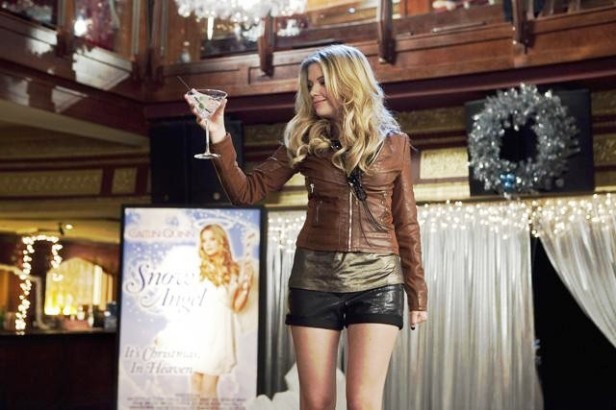 This was manipulation at its best. There was not much build-up for the relationship between Sloane and Patrick, and our attachment to it is only because of one scene. I may be wrong but I think you need to spend time with your fated couple to make the audience really feel the chemistry.

Most of the Christmas-ness is found in a handful of scenes, and really isn’t that prominent. Only the songs and the A Christmas Carol tie-in saved this movie from a very low score.

All in all, Christmas Cupid is a superficial story with some A Christmas Carol references. Only Benson’s performance kept me interested in the film because despite Caitlin having immature moments in ghost form, she was the only one of the leads that shined in the comedic elements of the movie. As a vehicle for Milian, it failed to give her much to work with. Sloane was a 2D character in a story that required her to have some layers. Now, I’m not entirely sure if her performance was forgettable because of a lack of talent or a poor script, but either way, the “Scrooge” of this story was more selfish than greedy, and greed is a must to make the story work.