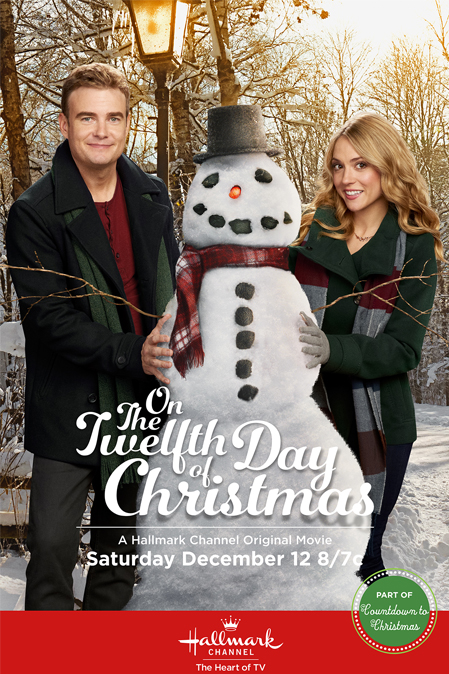 PLOT: A journalist’s ethics are tested when she anonymously gives a DJ 12 symbolic gifts to help him recover his Christmas spirit in an effort to repay a kindness he did her years ago.

On the Twelfth Day of Christmas provided an odd viewing experience for me — and I apologize for sounding like Chris Christie — because I have a journalism degree and had to take ethics classes. Needless to say, I was squirming throughout the entire movie. If she had any job but journalist, I would have had a much better time watching this movie.

Brooke Nevin (Breakout Kings) plays Maggie Chalke, an aspiring reporter at her small town newspaper which is about to be sold to a conglomerate, and because of this she may lose her job. She then randomly hears an old college crush, Mitch O’Grady — played by Robin Dunne (Skulls 2, Sanctuary) — on the radio as the new morning radio DJ for the town’s all-Christmas music station. After finding out that Mitch no longer loves Christmas, Maggie comes up with a plan to reignite his Christmas spirit as he once did for her when the two were trapped in a blizzard on their way home from college. She becomes his Secret Santa, and will send him 12 gifts to represent the 12 days of Christmas.

This is where I start having an issue with the movie’s plot and Maggie dedication as a journalist. After two days of gifts, the program director at Mitch’s radio station decides to publicize the gesture. She post it to the station’s website and calls the local paper. That paper assigns — you guessed it — Maggie to cover the story. Now if you don’t instantly see the conflict here, then you will see nothing wrong with what happens the rest of the movie. If you do, then be ready to cringe with every scene.

As her editor says at the end, she broke every rule in the ethics book. First, she’s covering a story she’s a part of without disclosing that, and not just a part, but a huge part of the story. Sure, she tries to get out of the story, but if she had any ethics, she would have told her editor it is a conflict of interest. Second, she continues to send the gifts, which ensures that she will write more stories. This is essentially the plot from Backdraft, but swap firefighters with journalists and fires with ethics. The worst part is when she does come clean, she confesses on the front page of her newspaper that she is a completely unethical journalist.

She must get fired, right?

No. Even though she probably loses her new job at a bigger paper, her current editor wants her to stay on despite that she just proved to be the worst journalist in the world. She did everything we are not supposed to do, except plagiarise, and her boss was like, ‘cool, whatevs.’ I was so infuriated. No wonder newspapers are dying.

There was a soup kitchen scene, so that’s kinda… Who am I kidding?

Another formulaic love story with a predictable ending. Mitch’s reaction to finding out that Maggie is his “Secret Santa” feels a little contrived as if they had to find a reason to throw drama into the story. The revelation also came too late in the film to have any impact, and it was obvious that he would take her back. I’m not saying it shouldn’t work out the predictable way, but there should be some doubt in the viewer mind that things may not work out.

While it was another attempt at a small town Christmas, the set design was so inauthentic that it was easy to tell this was filmed either out of season or on a set. The decorations were beautiful, but the snowman was obviously not even made of fake snow and the “snow” on the ground looked like that stuff you put in your windows for decorations.

On the Twelfth Day of Christmas is probably a perfectly fine movie is every other aspect, except the journalism part. I have never been so angry at a character that wasn’t an actually villain. I would love to sit down with my favorite journalism professor at Penn State, Russ Eshleman, and record a RiffTrax type of thing. I’m sure there’s a good movie in there but I just can’t see it.