One of the best shows of 2015 returned this week and it picked up right where it left off. Better Call Saul is better than it deserves to be; Vince Gilligan has managed to make a slightly lighter television show that exists in the same dark universe of Breaking Bad and has kept the quality. Of course, Saul Goodman was always the lighter side of Breaking Bad, so it’s seamless to see him inhabit this universe again. What we haven’t gotten (just yet) in terms of violence from the original show, we get a deeper sense of self-reflection that adds to the drama.

The first episode of the second season starts the same way the pilot episode did: a black and white look into the life of Saul in a post-Breaking Bad world, slinging Cinnabon in the Midwest. It’s a bleak opposite world he lives in, especially when you contrast it to the Slippin’ Jimmy con artist ways he tries to relive in this episode, as well as the high profile lawyer job he settles into at the end of the runtime. Here’s what we learned:

Editor’s Note: Also, shout out to Vince Gilligan for bringing back Ken Wins from Season 1 of Breaking Bad (he was the guy who owned the car Walter White torched).  I knew I’ve seen Kyle Bornheimer play the same role somewhere.

The opening vignette of Saul closing up his restaurant eventually winds up with him getting locked in a back room of the mall with the trash. There’s an emergency exit, but the sign says the alarm will sound. He thinks about it, but resigns himself to wait it out until a custodian opens the door that locked behind him, a full two-and-a-half hours later.

Backtrack to a Jimmy McGill settling into his new office at a law firm in Santa Fe, and a light switch is covered with a warning to never switch it off. Saul flips the switch… and nothing happens. This tiny little flip of a literal switch is a sign of things to come, as Jimmy will eventually bend and break rules when he makes the transformation into Saul Goodman.

One of the major relationships so far in the show has been Jimmy’s relationship with Kim, a fellow lawyer that it is obvious Jimmy has feelings for. In the beginning, as Jimmy has the opportunity to take a job in Santa Fe, but refuses when he feels it would end whatever it is that Jimmy and Kim have together, as they would now be in different cities. As Jimmy takes his extended leave from lawyering, we get some great moments between Jimmy and Kim as he shows her a life of swindling hedge fund managers out of top shelf tequila and a night of love-making together, possibly for the first time.

The thing is we know where Jimmy ends up: a manager of a Cinnabon in Nebraska with no Kim. We don’t even get a sniff of Kim’s existence in the events of Breaking Bad, when Jimmy is in full Saul mode. Of course, this could just be a retconning moment, but it seems to me that his relationship with Kim plays into Jimmy throwing away all his integrity in order for fast money. This won’t end well. 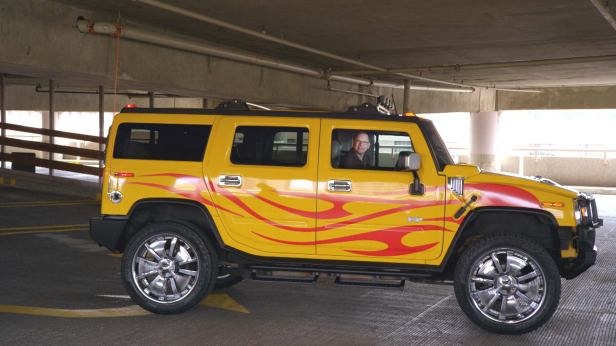 If you’re a schmuck computer technician stealing prescription drugs from work and selling them to a local drug dealer, you probably don’t want to go alone with your brand new Hummer H2 that looks like Hulk Hogan threw up on it; especially when the badass ex-Philly cop that you’ve hired as protection specifically tells you not to.

Mr. Warmolt is not a badass and he’s in over his head without Mike behind him, which comes back to bite him in his ass almost immediately. He’s so oblivious, though, that he doesn’t even realize what kind of danger he’s been put in because he’s an idiot. He’s worried about a baseball card collection more than he is about the fact that a known drug dealer has just been in his house. This guy may not be long for this world.