Synopsis: After an extended period of time away from being Spider-man, Peter Parker regains control of his body and attempts to acclimate himself into the life that Doctor Octopus left for him.

On this installment of The Comic Spot, we break away from the DC comic universe to tackle one of the most popular (and the most profitable) superheroes in all of comics: none other than the Amazing Spider-man. When I did read comics when I was a kid, I gravitated towards Spider-man and his web (pun intended) or related characters. This is the first comic of his since I was a kid that I have read, so I decided, as I have done with Batman and The Flash, to jump in at the beginning. Or what counts as a beginning in the Marvel Now world.

Like the New 52 of DC, Marvel Now was built as a sort of benchmark for people to jump back into reading comics. But unlike DC, Marvel Now is considered a “soft reboot”, as some storylines are still carrying over into the new world post Avengers vs. X-Men. This series follows The Superior Spider-man of Marvel Now, and a great deal of the first volume of The Amazing Spider-man concerns Peter Parker relearning about the world around him.

You see, in The Superior Spider-man run of 2013-2014, Peter’s body and mind had been taken over by Otto Octavious, better known as Doctor Octopus. During the time Ock used Parker as an AirBNB apartment, he managed to get Parker an advanced science degree and even opened his own science research company, Parker Industries. This, along with strained relationships with Black Cat and Electro make readjusting for Peter a little difficult. Oh, and Peter now lives with a woman that he started to date while Octavious dated while he controlled Parker; so that won’t get weird. 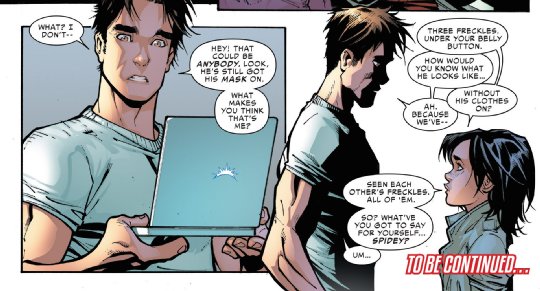 Most of the story is Parker trying to get a handle of basically being reborn, as he tries to catch up with the world Ock has left for him. I think it’s an interesting way for the writers to have progressed Parker’s story, as Spidey always seems to have trouble getting out of the high school years. During Parker’s time away, it looks as though Octavious really made a mess of things between Peter and Black Cat, Electro, and even got Parker into a line of work that the real Peter has no idea of how to do properly. It’s sort of an interesting fish-out-of-water situation and adds to the drama of Peter juggling life as a CEO and as Spider-man.

The action mostly revolves around Black Cat and Electro trying to get revenge on Parker for what he did to them while Ock was controlling things. Black Cat is still holding a grudge for getting sent to jail and Electro happens to have an issue with Parker’s role in his accidental killing of a bunch of people at the local prison. It’s an okay story that tries to keep you informed of what has happened prior, either through flashbacks or through citations directing you to the relevant back issues. It also introduces you to Silk, a girl that has been locked away at a research facility that happened to get bit by the same spider that gave Peter his powers.

This is another recent title that looks great and is completely in line with the spirit of the comic. The colors are bright and vivid, feeling almost like something you’d see in an animated feature of Spider-man. I’m usually drawn to comics drawn like this rather than one that goes for a more hyper-realistic art style. Maybe it’s just where it lies on the Uncanny Valley scale that just hits my sensibilities properly; I just find these more palatable.

The biggest thing to come out of this volume is the introduction of Silk, a girl named Cindy Moon that happened to be bitten by the same spider that gave Peter his powers. Locked away in a research facility for more than a decade, she’s freed by Peter and they team up to take on Black Cat and Electro.

I like the introduction of Silk in this; it didn’t take me long in my research to find someone label her as a “Mary Sue”, which is the catch-all for men to dismiss female characters these days, but I thought it was a fresh addition to the world. The dynamic between her and Parker work well, too, as they find themselves unable to resist the natural magnetism that comes with sharing the same spider-related affliction.

As mentioned earlier, a lot of the volume deals with Parker trying to learn his new life on the fly, as a CEO and as Spider-man. It’s sort of uncharted territory for the character, who has sort of been stagnant in multimedia for a while now. 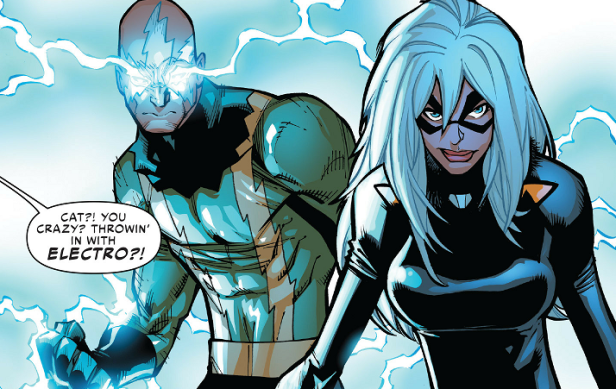 Old standbys Black Cat and Electro serve as the antagonists in this one, as they are both harboring grudges that come from Doc Ock’s time controlling Peter. It’s mostly Black Cat running things, though, as she tries to use Electro’s unstable powers to blow up (literally) in Parker’s face. It’s an interesting wrinkle, this revenge idea, to the dynamic, but it also comes off a little like a woman scorned, which is a little trope-ish and I feel Black Cat could be a little more interesting than that.

Overall, while a decent start to getting back into the Spidey world, there’s a lot of time spent cleaning up and catching the reader up to the goings-on. These trade paperbacks of Marvel seem to be thinner than DC’s volumes, so it seems like they kind of ran out of time to have a more developed story. I enjoyed it for what it was, for introducing an intriguing character, and seeming fresh overall, it’s a step down from the Flash volume highlighted last time or the full run of the Batman New 52 that I’ve read so far. It seems like Marvel has done a better job on the whole in keeping their fans happy, as opposed to DC, but in this case, DC has a slight upper hand.