He can’t walk and the wights are hot on his heels. In an episode where no one dies, Bran is at the bottom of the totem pole.

Getting dragged around Westeros following Sam is pretty bad. You may as well be dragged around North of the Wall because you have no use of your legs.  At least she got a bath, though.

The battle that didn’t happen, Jaime’s plan to have the Tyrell’s take over King’s Landing from the High Sparrow was ruined by Margaery turning Tommen towards the faith. What becomes of this storyline remains to be seen, but I’m going to guess that Margaery has a trick up her sleeve.

It sucks being Sam, make no mistake. But he now has a sword made of Valyrian steel. That’s going to come into play soon, no doubt.

A really anticlimactic ending to Arya’s attempt to become one of the followers of the Many Faced God, Arya now has a target on her back, as The Waif has permission from Jaqen H’ghar to take her out. I have faith that Arya is going to wind up putting Needle through that bitch’s heart, but for now, it’s not looking great right now for her. 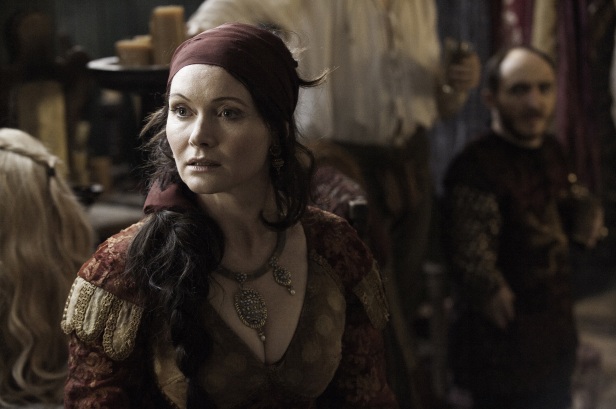 She may be in actress purgatory, in a play that she’s much too good for, but she’s not going to die, so that’s a good thing.

I have no idea what her plan is, but she’s now free, so things are obviously looking up for the person that has spent two half-seasons locked up. Good for her.

This bitch has been chomping at the bit to put an end to Arya and now she finally gets the chance. I don’t think this will end well for her, but things are looking pretty great right now.

If it sucks to be Samwell Tarly, it’s pretty good to be Dickon. His dad loves him and he’s a hell of a hunter. Not much more to report; his life is pretty great considering how Samwell’s life has been going lately.

Haters gonna hate, but the High Sparrow keeps his grasp on Tommen and all of King’s Landing, all the while never changing out of his dirty nightgown.

Emilia Clarke’s acting still bothers me, but now she has Drogon back to go with her ever-increasing army. Things are looking up for the Mother of Dragons, and even though this storyline is moving at a snail’s pace, there are few people you’d rather be in this world right now.

In this episode, the only thing better than being the leader of a massive army that found her missing dragon is being the dude who was presumed dead for six seasons only to come back as this ultra badass wight killer that comes in to protect his nephew, the kid that may or may not be the Lord of Light, depending on which theories you subscribe to. Benjen and Coldhands were two different characters in the book, but this combination of two characters work best for the TV adaptation.