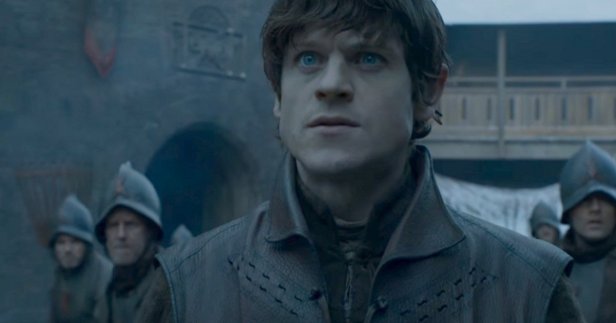 I’m not going to say that Rickon deserved to die, but I feel like he kind of does. You can run in two dimensions, Rickon. Use them. Oh, wait. You can’t now, because you’re dead.

Still dickless. Also, tell us how you pee.

He was awesome when he told the Boltons to go fuck themselves, but here he ran into Tormund Giantsbane, one of the craziest motherfuckers in Westeros.

Wun Wun went out like a hero and said, “Fuck your door!” before succumbing to an arrow through the eye. You hate to see a heroic character go out like that, especially at the hand of that psycho Ramsay, but he was imperative to taking back Winterfell, and for that, we salute him.

This hasn’t been a great season for Tyrion. Honestly, he hasn’t been himself since he killed his father, but he’s an okay adviser in this episode. He keeps Daenerys from going full Mad King on everyone and gets her to use a lighter touch, which apparently means only burning down a few ships with her massive dragons. I mean, that would be my trump card, too, so I guess it makes sense.

Tormund went full-on Roadhouse on Smalljon Umber, and then kicked it up a notch. He didn’t tear Smalljon’s throat out, he ripped it out with his goddamn teeth. Pure badassery.

I got to be honest, Jon Boy: this battle wasn’t your proudest moment. You fell right into Ramsay’s trap and had to get bailed out by Littlefinger of all people. You’re so goddamn lucky.

I love the fact that Yara and Theon were basically just like “That’s a great idea, uncle. We’re going to steal your ships and do exactly that. Peace!” and then it fucking worked! They basically just pulled a Thomas Edison on that asshole. Yara gets a showing here because Theon is still dickless and not in an empowering way.

If the “Game of Thrones” had a point system, Baelish AKA Littlefinger might have the all-time lead. Baelish is about as cuddly as a snake, and he’s really hard to root for, especially after he sold Sansa off to Ramsay, but dude sees miles ahead of everyone. He always positions himself to benefit from whatever major thing is going on in the world around him. He’s the vulture picking on the zebra carcass after the lions finish with it. But, you know, if that vulture was the one that tipped the lions off in the first place.

It doesn’t suck having dragons, that’s for sure. Dany’s got three fire-breathers working for her and now she has the ships she’s needed for five seasons and a hella big ass army, comprised of Dothraki, Unsullied, and Iron-born. Most kingdoms have armies, some have ships, but only Daenerys controls the skies. And now, she’s formidable in all three. If this were Sid Meier’s Civilization, this game would be over in 10 more turns. I think. Personally, I’ve never played it, but I’m aware of it and this seemed like an appropriate time to use this reference.

It’s very rare that we actually get a story in this universe in which someone gets closure in a horrifying chapter in their life. Luckily, we actually got it this time with Sansa, whom got to get the last word on her rapist husband, Ramsay. As much as I really just wanted to see Jon Snow beat his face in, the Ramsay kill was Sansa’s to take and girlfriend enjoyed every minute of it.