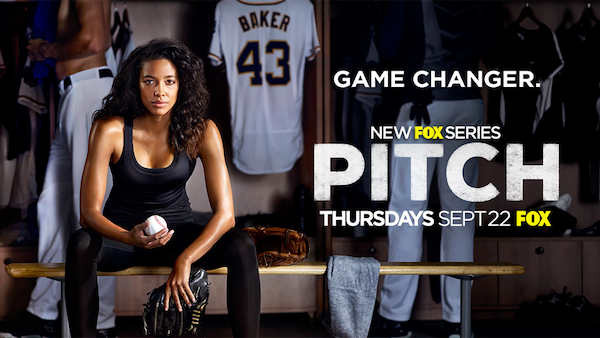 Tagline/Summary: A young pitcher becomes the first woman to play in the Major Leagues.

After watching something for while, whether it’s sports or TV Shows, it is easy to be lulled into the idea that you know the right way something should be done. For most of us, we have never experienced what we are criticizing, but we’re damn sure that the professionals are doing it wrong. This doesn’t mean our thoughts on the material is wrong, or even misguided, but rather that us as the audience doesn’t know everything. It is good to be surprised sometimes, and that is what Fox’s Pitch did.

Like calling plays from a couch during a football game, I sometimes think what I would do differently than the writers, and I usually never take back those thoughts while watching the episode. Pitch‘s creators, Dan Fogelman and Rick Singer, made me do just that, not once but twice, and it’s been a long time since I’ve experienced it. Pitch‘s premise is one that many will see as far-fetched, but honestly it is not, and the way Fogelman and Singer present it is very smart. What they hit on the most is that she is not some wunderkind pitcher coming to save the day, she’s a short-term replacement called up for ticket sales. This grounds the story in sad, but true way.

The pilot opens with Ginny Baker preparing for her first start with the San Diego Padres, in which she would become the first female to start a game in Major League Baseball. Director Paris Barclay does a solid job of driving home the craziness that would be involved in a situation such as that, while also keeping the focus clearly on Baker, who’s played by Kylie Bunbury. Without a doubt, Bunbury has the making of a breakout star and it’s mainly because she uses a lot of really good non-verbal reactions to portray her character’s change from confident world-beater to someone who is completely overwhelmed by the moment. This skill is what separates young actors and something that is a know-it-when-you-see-it thing. 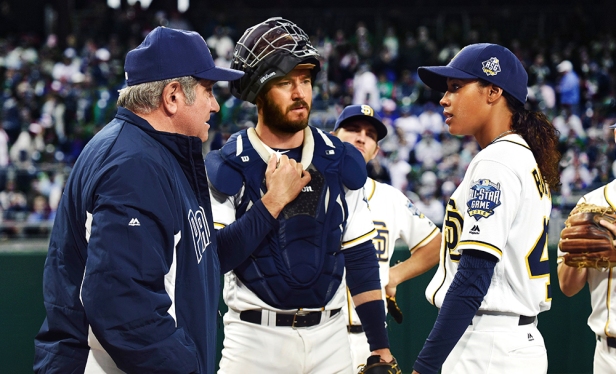 Just like in the show, a budding superstar needs someone with experience to guide them through the minefield that is finding your potential, and Pitch chose Marc-Paul Gosselaar to portray long-time star catcher, Mike Lawson, who is tasked with getting Baker through her first start. Gosselaar is one of the most underrated TV actors, which is mostly because his most famous character was a blonde California high school student. He has shown on multiple occasions that he has range, and that he is almost unrecognizable when he first appears is a testament to his talent. He does enough to make you equally hate Lawson and love his relationship with Baker, and as someone whose had to run to the mound of a struggling pitcher before, he gets a lot of the little things right with his body language and tone. Catchers have to sometimes be amateur psychiatrist, and most of their big or small screen counterparts fail at this because they come off as too cheesy, which to the writers’ credit, they call out during his mound visit near the end.

There were many moments in the pilot where they very easily could have exploited Baker’s sex to pull emotion from the audience, or turn it more into a full-blown daytime soap and they didn’t, no matter how hard Mark Consuelos tried. The restraint show in the storytelling, especially in the scene with her teammates’ wife, allowed Baker to remain a relatable character and not a caricature. She never reached either end of the stereotypical extremes for female characters; never a damsel in distress nor a full-blown tomboy. Straddling this line moving forward will be important for the series to work because Baker needs to be as real as possible and not stray too much into gender stereotypes. Instead, they focused her story on her family dynamic growing up, and her overbearing Father, and the real phenomenon of wanting to live your dream through your child.

While Pitch wasn’t a perfect pilot, it still hit enough notes for me to want to continue watching it. The twist at the end was one of the best I seen in a while, and one I did not see coming. If any series was in danger of failing my first four episode test, it is Pitch because everything in the pilot is perfectly-paced and there isn’t much fat on the episode, which is something that is hard to do when there’s not multiple months to work on an episode. Bunbury and Gosselaar have the chemistry to carry this show through some weak episodes, but if they don’t build a solid foundation early, Pitch will fall victim to Fox’s notorious quick ax.