For 31 Days of Halloween this year, Dan Aquino will be reviewing a staple of October TV of the past few decades: The Simpsons’ Treehouse of Horror Halloween Special.  Here’s the first installment, featuring classic tales that include the first appearance of some classic characters.

Homer returns home from a night of trick r’ treating and decides to listen in on Bart and Lisa exchanging scary stories in Bart’s treehouse.

This segment takes heavily from both Poltergeist and The Amityville Horror. The Simpsons wind up moving into an old house and immediately find out that it’s haunted. Books levitate, the walls bleed, and house tells the family members to kill each other. This segment has a much darker tone from following segments which usually have the Simpson trademark comedy involved, namely the house saying some pretty disturbing things to the family. Not necessarily a must watch if you’re a casual Simpsons fan, but it’s not a bad place to start.

Hungry Are The Damned

Most Treehouse of Horror fans will know this segment as the first introduction of later Treehouse staples, Kang and Kodos. The Simpsons are getting ready to enjoy a nice barbeque when a UFO arrives in their backyard and beams up the family. Kang and Kodos explain that the Simpsons will be their guests of honor on their home planet Rigel 7, and offers them feast after feast to which Lisa starts to get suspicious of the alien hosts. She explores the ship and discovers a cookbook that reads: How To Cook Humans. She warns her family about the seemingly sinister plot which leads to a pretty funny back and forth between Lisa and one of the aliens dusting off the cookbook to reveal the true title: How To Cook For Forty Humans. The aliens become hurt at the thought that they would eat their guests and berate them for their actions, finally dropping them off at home.

This one has a little more humor in it, from Homer needing two separate beams to suck him up to the UFO, to Serak telling Marge that he would have to cut out her tongue in order for her to pronounce his name correctly. It’s interesting to note that this is the only time that Kang and Kodos appear to be friendly towards the human race, as opposed to later episodes where they wish to conquer Earth. 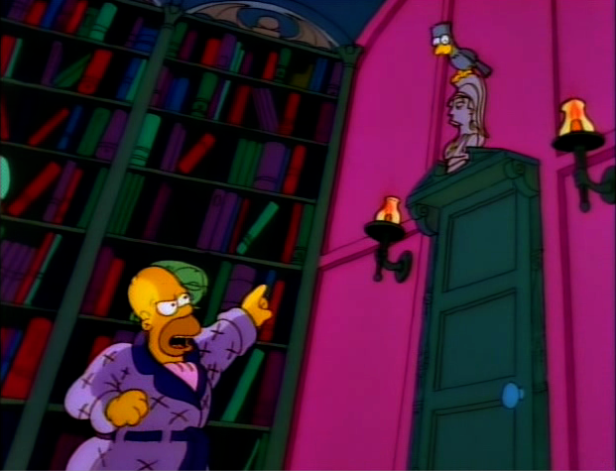 Lisa takes the reigns on this story and delves into the Edgar Allen Poe classic The Raven. Narrated by James Earl Jones, Homer is portrayed as the protagonist of the short story with Bart being the titular Raven that torments him. Not really much to say here as nothing deviates from the story, but there are some pretty cool references to other Poe works such as The Pit And The Pendulum, The Telltale Heart, and The Purloined Letter.

Airing in season 2, the first installment of Treehouse Of Horror doesn’t really hit its stride yet in terms of comedy simply because The Simpsons themselves hadn’t gotten to that point yet. It has some classic references peppered in, and it has the graveyard opening scene that would be used in every future Treehouse episode. This episode also introduces James Earl Jones, who would lend his voice to other Treehouse installments. Overall this isn’t a very strong Treehouse Of Horror but still is worth mentioning simply for getting things started.

One thought on “Dan Reviews: Treehouse Of Horror I”