PLOT: A shy and traumatized girl goes to summer camp with her cousin. Shortly after they arrive, anyone that acts mean to her winds up dead.

Man, fuck this movie. I’ve seen worse movies during this month of horror movie watching, but I think I came away with a much worse experience in this one than any other movie.

This movie is a cult classic, and part of that is because of the ending, which predates The Crying Game by nearly a decade. I knew the ending going into this one, but I don’t think that ruined it for me. The truth is that the ending is completely unearned. There’s really no reason for it and while there are hints at this ending coming, it’s dumb as fuck and is completely unnecessary to the rest of the story.

I’m going to spoil this right here, so stop reading if you don’t want to find out about how this ends. It turns out that Angela’s weird aunt forced her to live life as a female, even though she was born a boy. This isn’t found out until the end, which I guess is supposed to be some revelation, but the revelation should be that she’s fucking killing people. At the end, the counselors stumble upon her, naked while holding someone’s head, and they’re more surprised about her penis than the fact she has someone’s severed head in her hand. This movie gets its priorities mixed the fuck up.

On top of that, let me just address Judy, the biggest bitch in the whole fucking movie, in a movie filled with giant bitches. This, I guess, is supposed to be the “hot girl”, but what the fuck is up with her body proportions? She has a large head, no neck, freakishly long arms, and a small torso. It’s weird looking.

I was happy to see everyone die. And the fashion is god-awful.

Sleepaway Camp does a pretty decent job at the gore. There’s nothing too crazy, but it’s about on par with the original Friday the 13th film.  One of the kills is pretty unsettling, but it’s done offscreen.

Not scary at all. Just be nice to the weird quiet kid.

Bunch of “straight” guys go skinny-dipping together and we get some full frontal male nudity from the killer. Not great, but there is nudity.

Sleepaway Camp isn’t a particularly bad movie, but I found myself hating the characters, hating the fashion, and hating the ending. The ending is pretty crazy and the final shot is pretty creepy looking, but trans-phobic undertones aside, it’s really unnecessary. This reveal should be the obvious one: that Angela was a killer the whole time, not that she was the killer the whole time and also a boy; It doesn’t add anything to the story or her arc. It just feels like a cheap way to shock audiences. 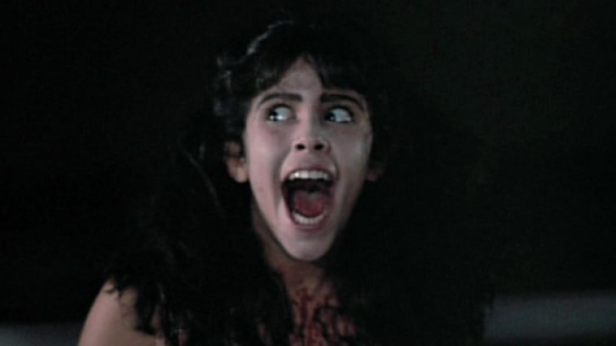