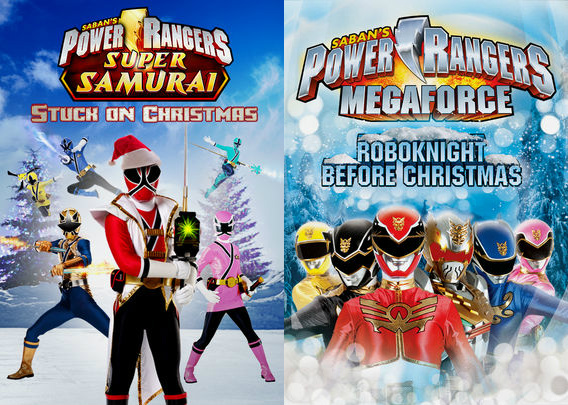 PLOT: Robo Knight learns the true meaning of Christmas from a group of children when he is mistaken for a donated Christmas toy and is shipped in a charity crate to a foreign land./ The Rangers have to escape a malfunctioning Megazord in order to make it home for the holidays.

So the Power Rangers…

You are probably wondering how we got here…

While perusing the Netflix list for Christmas movies to watch during this series, I noticed that they had three different Power Rangers Christmas specials, and I was overcome with a combination of masochism and curiosity. I decided to pick the two tat were on different ends of the star rating system scale, and boy were those ratings correct. It is rare that two things that are both pretty terrible actually have a distinctive level of terrible-ness between them.

First up is Power Rangers Megaforce: Robo Knight Before Christmas, which focused on teaching a ninja robot the meaning of Christmas. In concept, it’s probably actually a good way to do a  special for a series advertised toward children because you get to both have cool ninja and comic relief moments, while teaching them something at the same time. Despite the bad acting of both the robot and the Power Rangers themselves, it wasn’t all that terrible. Most of this was because there wasn’t a lot of action, and doubled as a Best of Clip Show episode , which made it passable for 20 odd minutes. I felt I learned more about the characters in this show than the second one I watched, so I can see why it has four stars on Netflix’s scale.

Choice No. 2, Power Rangers Super Samurai: Stuck On Christmas, was ridiculous and every sense that a Power Ranger show should be. Acting was pretty awful, the action was terrible, and the story itself was confusing and barely conveyed any message. The only connection to Christmas was that their leader was decorating a tree and they wanted to get home for the holiday. There was not an overall narrative or anything to make this episode worth the money they spent on it. I know it’s easy picking to describe how bad the current Power Rangers show is, but at least with Power Rangers Megaforce: Robo Knight Before Christmas, there was a theme throughout. Fortunately for kids watching today the lesser one, which got two stars, was the older of the two. So that means that the show may have actually gotten better (?).

Power Rangers Megaforce: Robo Knight Before Christmas appeared to have a love story between four of the five Rangers. Obviously they were split off into heterosexual pairings because I’m definitely not expecting Power Rangers to have progressive social storytelling. As for Power Rangers Super Samurai: Stuck On Christmas, I couldn’t tell any romantic links between the Rangers but the only romantic feelings seem to come from the goofball comic relief townie, and the Pink Ranger (of course).

Once again, this is something that the first show got better than the second show. Outside of the Christmas tree at the “dojo” and one of the enemies being red and green, there was not much else Christmas-y in Power Rangers Super Samurai: Stuck On Christmas. While in Power Rangers Megaforce: Robo Knight Before Christmas, the entire episode was about Christmas, from decorations and toys to the meaning of the holiday, which gave it the advantage over the first one.

If you had a gun to my head and asked me which one to recommend you watch, I would obviously choose Power Rangers Megaforce: Robo Knight Before Christmas because it actually promotes a positive lesson for the kids that may be watching. Power Rangers Super Samurai: Stuck On Christmas has this ridiculous modeling scene in the middle of it that I have no idea where came from, and it seem completely out of character from what I can tell. I could be completely wrong about that, but I don’t really care.