There are a lot of terrible Christmas songs, and a lot of these songs are problematic in their own way. Even if they’re not necessarily a ‘bad’ song, they may have terrible morals or messages involved.

Take “Christmas Shoes” for example. A lot of people can’t help but shed a tear when they hear that cloying song about a street urchin suckering a guy into buying him some shoes with a story about his dying mom, when in reality he’s probably just going to turn around and return them when the cashier goes on break. But as manipulative as this song is, it’s not the worst.

How about “Baby It’s Cold Outside”? It’s definitely the most problematic of all the Christmas songs out there. It’s more or less some guy trying to talk his way into a woman’s pants, possibly by putting something in her drink. This may be Bill Cosby’s favorite Christmas song, but alas, it is not the most horrifying.

Maybe it’s the very 80s celeb-a-thon of Live Aid’s “Do They Know It’s Christmas?” which may as well be called “White Guilt: The Song”. It’s truly a very white (and British) concern that people in Africa may be soooooo poor that they don’t even realize that a commercial holiday based around a religion that they wouldn’t even know existed if it wasn’t for British colonialism happens around this time of year. Maybe I’m being glib, but Boy George can’t save Bob Geldof’s message song.

Could it be Paul McCartney’s “Wondeful Christmas Time”? No. That song sucks, I assure you, but it’s not the most horrifying.

No, ladies and gentlemen. The most horrifying Christmas song of all time is…

“I Saw Mommy Kissing Santa Claus” by the Jackson 5.

And I am specifically talking about this version of the song. Don’t get me wrong, the song is a twisted Oedipal nightmare, as a child gleefully watches what they think is a mystical fat man with an incredible fashion sense cuckolding their father, but this song has an added wrinkle.

And that wrinkle is Joe Jackson.

If you don’t know much about Joe Jackson, let’s just say that he wasn’t exactly the best father in the whole entire world. He may go down as one of the most influential band managers of all-time, as the architect of one of the greatest pop groups ever, but he’s also the architect of music’s most tragic icon. Joe Jackson abused Michael and his brothers physically and mentally, to the point where Michael make consistent excuses for his father’s brand of shitty parenting, even celebrating his birthday as ‘Joe Jackson Day’ every year at Neverland Ranch.

So, back to the song. You’re familiar with “I Saw Mommy Kissing Santa Claus”, maybe a few renditions of it. John Cougar Mellencamp does a pretty decent version of it. A kid goes down to see if he can catch Santa in the act, and boy, does he ever! He actually spies Jolly Ol’ Saint Nick putting the moves on his mom. Now, as adults living in the real world, we know that mom and dad are just into some festive role play, and if the kid sticks around, he’s probably going to see his mom do a little bit more than kissing or tickling his chin. But in the kid’s mind, and in this case, Michael’s, he’s witnessing Katherine Jackson cozying up to Santa.

To top it off, every version of this song has a line about how great it would be to have dad walk in and catch his wife in the act. In the Mellencamp version, it doesn’t come off as that creepy; I don’t know how good of a husband/father Mr. Cougar Mellencamp was, but he’s probably not as horrifying as Soulless Joe Jackson.

There are 2 possible universes this song can take place, and neither is particularly reassuring. 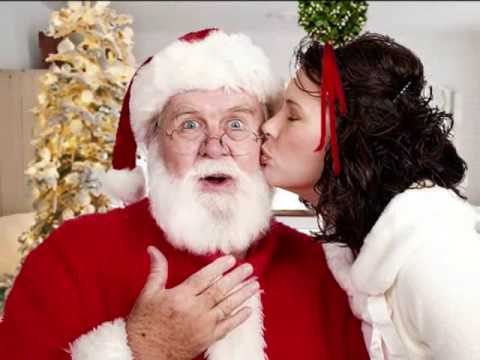 This is probably the most frightening, because Joseph Jackson is going to find out about this. In the song, there is a little back and forth between Michael and his brothers. They chastise him for what he says he saw, and he then concludes, and I quote:

“I did, I really did see mommy kissing Santa Claus
And I’m gonna tell my dad”

Picture that scenario: Michael running up to Joseph “Iron Fist” Jackson and telling him that he witnessed his wife fucking a mythical fat man. What do you think Joe Jackson would do? Beat his wife within an inch of her life? Probably. And do you think Michael gets off scott free? No sir, Michael would get his whooping for sneaking downstairs AND for snitching. There’s a chance Joe Jackson kills someone in this, the Darkest of timelines.

Note: There would be another picture here, but after the one above, things got weird…

This may sound like this is the most harmless outcome, and technically it is, but Michael still gets beat in this one. Joe Jackson would whip his boys with a belt if they didn’t perform perfectly, so if Michael comes to him and lets him know that he was peeking on him when he was supposed to be fast asleep, then Michael’s gonna get the belt. This could be even worse for Michael, because in the other scenario, Michael’s mom will probably get the brunt of it and Joe may even take it easier on his son for telling him that his woman is stepping out on him. Here, Michael is out on an island. An island named “Ass Whoopin’”.