Editor’s Note: For the most part, I avoid spoilers, but let this be your warning that there may be something you may not know unless you’ve seen the film.

Jackman, however, first came into the lives of moviegoers AS Logan, and since then, no one else has played him. It’s been a long tenure for the Australian actor, and while the movies might not always be the best, Hugh Jackman has always stood out. Arguably, Hugh Jackman as Wolverine is basically this generation’s Sean Connery as James Bond; it’s hard to imagine anyone else taking on the role, but inevitably, it will happen. For his expected final time in the role, 20th Century Fox gave Jackman the best X-Men film in the franchise.

For Logan, we skip ahead a decade or so to 2029, which is just enough into the future to see some slight changes: corn is produced only to make corn syrup, long-haul trucking is done by automated big rigs, and human genetics projects blur the lines between the ethical and the inhumane. For some of our favorite mutants, the future is even a little bleaker.

Our Logan in this future is beardy, sickly, and driving a limo under a pseudonym. When he’s not driving the occasional drunken bachelorette party to the nearest club, he’s taking trips across the border into Mexico to care for an ailing Charles Xavier, whom he is keeping under wraps in an abandoned factory. Things take a turn from moderately terrible for everyone to, somehow, even worse, when a Mexican nurse taps Logan to transport a girl to North Dakota. Unbeknownst to Logan, the girl is gifted with the same adamantium skeleton and regenerative properties that has cursed him his entire life and there are plenty of people that would like to have her back in their possession. 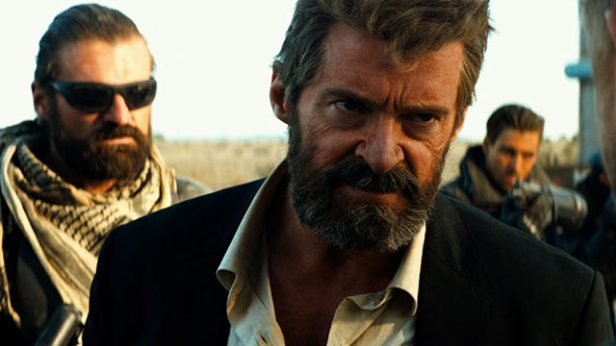 If there’s a legacy that I can credit Deadpool with, it is that it made this film possible. While I thought the Ryan Reynolds passion project was fine (the comedy didn’t hit with me), that film opened the door to an R-rated Wolverine film and that slight change perhaps made all the difference. Don’t get me wrong, I’m not blood thirsty, I don’t need R-rated gore, boobs, and cursing in all of my films, but when certain films hold back, it’s noticeable. It’s the difference between Die Hard and the version of Live Free or Die Hard that was released to theaters. Logan naturally fits in an R-rated world; if it had held back for the PG-13 rating, it would have been noticeable.

This is the perfect swan song for the actor and the character, and an unlikely thematic parallel to the classic western Shane encapsulates it so beautifully. For those that may have skipped that day in film history class, Shane is a movie about an old gunslinger that reluctantly falls back into killing in order to protect a community being bullied by unseemly cattle barons. Shane’s killing past always seems to follow him, both in his reputation and in the physical world, and Shane decides to leave, bloody and dying, an outcast in a changing world that proves to have less and less use for him, and one that won’t let him be anything else but a killer. Put that sentiment in a near future with mutants, and you have the character of Wolverine. It’s a completely appropriate parallel drawn, and one that sets an incredible motif for this film.

As great as it is to see Hugh Jackman and Patrick Stewart in these roles one last time, the film’s breakout performance is by actress Dafne Keen in her first film role as Laura. It is a demanding and very grown up role for such a young actress (born in 2005), and Keen is able to pull off the role without getting lost behind the megastars she shares the screen with. The difficulty with filling child roles is finding that balance of precociousness that doesn’t feel annoying or unrealistic. As Laura (or X-23), the young Keen managed to show off some childlike innocence while proving a worthy successor to the Wolverine mantle.

Logan is a one-of-its-kind superhero movie: a father-daughter movie hidden in a western hidden in a road movie. The stakes aren’t about the end of the world, as we usually see from Marvel, and the villain may not be as grandiose as we’re used to, but the smaller story allows us some time to take in some favorite characters for one last quiet ride into the sunset.

3 thoughts on “No More Guns in the Valley – Logan Review”