I wasn’t much of a comic reader when I was a kid. There was a period in my life when, yes, I did go to the comic store and if I wasn’t there to purchase X-Men cards, I was there to buy a weekly issue. That period of my childhood was short-lived, but when I was buying comics back then, they were Spider-Man comics, or at the very least, Venom comics.

That being said, I’ve always been a fan of Peter Parker and Spider-Man, though I probably don’t treat him nearly as precious as some adult fans. The first two Sam Raimi films were more than adequate and I can even see the potential in the first Andrew Garfield film, The Amazing Spider-Man. It is disappointing to see him put through hell, having been abandoned by Raimi (that third film shows nothing but distain for the franchise) and then the wishy-washy conviction that lead to a second reboot of the franchise in less than five years. Sometimes, things happen for a reason, and perhaps that reason is that the role was waiting for the right person to don the tights. Enter Tom Holland.

Holland’s tryout as Spidey in Captain America: Civil War was a breath of fresh air. He was just the type of youthful energy that the franchise needed and, personally, it couldn’t have come at a better time. I was on the verge of comic book movie fatigue, and Spidey was a big part of what rejuvenated my interest for the genre. Luckily, Holland’s first full-length stab at the role is easily the best Spider-Man film to date.

One of the most refreshing things about this addition to the Spider-Man franchise is that we don’t have to sit through Uncle Ben dying yet again. I know that this is a main aspect to the Spidey lore, but it was excruciating to sit through during The Amazing Spider-Man and I wouldn’t have been able to deal with having to watch it for a third time in 15 years. Spider-Man: Homecoming assumes you know the deal and instead, it drops us off a few months after the events of Captain America: Civil War. Peter has been obsessing over the prospect of joining the Avengers, constantly checking his phone for updates from Happy Hogan (Jon Favreau) and skirting the social aspects of high school, just in case the call finally comes in. Even when he does try and do something a normal high schooler would do, like go to a party hosted by his crush, it’s not long before he’s off running through suburban backyards a la Ferris Bueller’s Day Off in order to stop an arms deal in progress.

More than the previous iterations of the Spider-Man character, Spider-Man: Homecoming is a pure coming of age story set against the backdrop of the Marvel Cinematic Universe. Peter longs to be a part of the Avengers and to be seen as an adult through that induction, but his lack of experience shows that, sometimes, you can’t rush into adulthood. This is where the John Hughes comparisons come into play, and I think it is appropriate, and it’s some of the strongest parts of this film. It should be no surprise that one of the many hands that touched the script is John Francis Daley, one of the young stars of the great Freaks and Geeks and since then, an accomplished screenwriter of comedic films (Horrible Bosses, Vacation). Of course, while John Hughes’ characters are stuck dealing with overbearing, sometimes abusive parents, Peter is stuck with balancing school responsibilities with trying to prove that he’s a good enough hero to thwart illegal dealers of alien-tech weaponry. Your move, John Bender.

This balancing act would be nothing without a believable lead and this film works primarily because of the performance from Tom Holland. If you’ve ever seen a jack russell terrier try to intimidate a much bigger dog, you can understand the personality that Holland takes on as Peter Parker in this film; he’s young, energetic, and motivated, but he’s just not ready to handle things on a big league level. This can almost be seen as a critique of the previous Spider-Man films, as well. 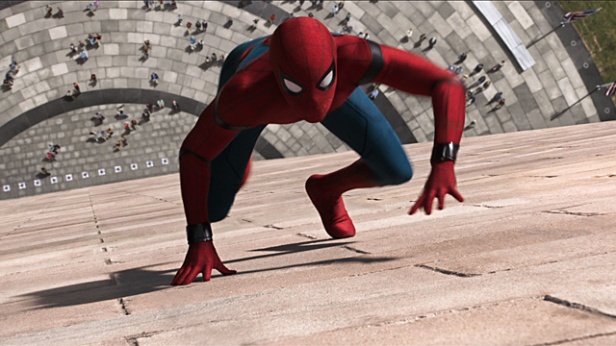 One of the main problems with at least The Amazing Spider-Man franchise is that the filmmakers had Peter battling villains whose motivation was far beyond his pay grade. Spider-Man has always been street-level, like Daredevil, and is best when he’s stopping bank robberies or car thieves. We don’t need a main villain bent on world domination, and in Michael Keaton’s Vulture, we get a guy that is just trying make some money.
After the events of The Avengers, Adrian Toomes’ (Keaton) construction company gets the salvaging contract at Stark Tower until the government and Stark Industries push him out. Having overextending himself monetarily for the job (and without any compensation), Toomes and his crew “forget” to return some of the equipment they previously salvaged, instead using the alien tech to sell for a profit and to make themselves a few little toys as well.

Finally, it’s a character motivation not based completely on revenge and it is, actually, quite an understandable character arc. Toomes wants to provide for his family and recoup his losses after he was cheated out of a make-or-break job. He’s basically Walter White with alien weapons instead of crystal meth, and Keaton is great in this, especially when he comes face-to-face with Peter Parker. His cool, collected menace is terrifying, but the character is a down-to-earth sort of villainy, which makes it all the more accessible and possibly, the best Spider-Man villain performance yet. 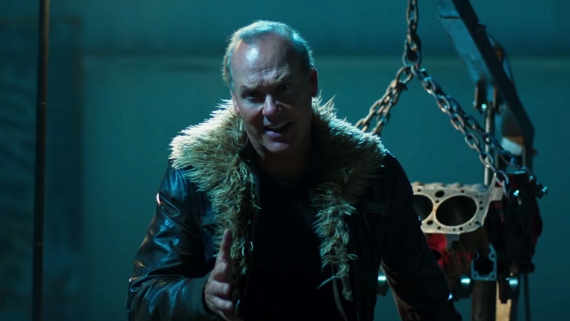 The rest of the cast is filled with recognizable actors and actresses that all play very well in this world that’s been created: Martin Starr, Bokeem Woodbine, Not Tom Hardy (Logan Marshall-Green), Donald Glover, and many others do a great job with the roles they have been given, especially Jacob Batalon, who plays Ned, Peter’s geeky best friend and the de facto comic relief. He’s a fun addition to the movie and will hopefully pop up in future films.

I want to stay reserved on this rating, but I personally cannot think of any reason why this movie would get anything but a 9 out of 10 for me. It’s about as fun as any movie that’s come out this year, and as fun as any other Marvel movie for that matter. Finally, Spider-Man has been given a film that has done the character right.