PLOT: Years after accidentally killing his mother, a college teen and his friends are stalked by his father when they spend the night at his beach house.

It’s always fun when you sit down to watch a movie on Amazon Prime, especially with a sweet title like The Mutilator, then you start it, and the movie title calls it Fall Break, which is extreme weak sauce.  Fall break is that completely arbitrary long weekend college kids get off from classes for god knows why.  It happens so close to the beginning of the school year that it literally has no point.  Maybe it used to be a Columbus Day holiday, but now those damned SJWs don’t want us celebrating a genocidal maniac from Italy; sunrise, sunset.

The Mutilator Fall Break treats this four-day weekend like it’s the greatest goddamn weekend of the year, complete with its own fucking theme song; in reality, it ranks slightly better than Rosh Hashanah and worse than the day before Thanksgiving.  Fall Break The Mutilator makes this seem even less of an awesome time, too, as they decide to spend it on the beach in the Outer Banks, where it’s far too cold to do anything that the Outer Banks is known for.

The film starts off with Ed Jr. as a young boy, dead-eyeing his mom in the back with his dad’s rifle while he cleans it for him for his birthday.  Cheap-ass Ed doesn’t bother to buy his dad a gift, instead puts his mom in a pine box.  Ingrate little bastard.  Flash-forward to when Ed Jr. is in college and his dad decides that it’s time to put an end to Junior by luring him to the beach house for some mutilating, because he’s… The Mutilator and it’s… Fall Break!  Ed Sr. didn’t expect Ed Jr. to bring the blandest group of sexy teens in a slasher flick with him, so he also has to kill them, too.  Which I guess wasn’t part of the plan, because he had no way of knowing they’d come, but it really doesn’t seem to trip him up.  If anything, he kind of embraces the opportunity, because you’d think he’d just go kill his son and then just say ‘deuces’ to the rest of them.  But no, he’s totally game.

For most of the run time, The Mutilator sucks.  It redeems itself in the last act, though, when we get some really gruesome deaths (one in particular) where the gore is pretty decent.  But you know who fucking sucks in this film?  Ralph, the “funny guy”.  Because the funny guy always sucks in these fucking movies.

There is one heinous kill in this one and I’m not 100% sure how my woke ass is supposed to feel about it.  Let’s just say that an enormous fish hook is not supposed to go… there.  It’s a pretty uncomfortable scene and one of some pretty decent gore moments in an otherwise subpar film.

Nah, fam.  I found myself kind of rooting for Ed’s drunk dad.

For a “sexy teens get murdered” movie, there’s little skin, as much as everyone is preoccupied with all the sex they don’t wind up having.  There’s a skinny-dipping scene which seems like it won’t show anything, but eventually does, so it’s weird it took so long to do so.

I can’t say this one is a particularly good movie, though it sort of redeems itself in the last few scenes.  There are some decent gore effects, but this is one of those cheaply (VERY cheaply) made slasher flicks that slithered out of the Friday the 13th afterbirth, while opportunistic folks with cameras tried to make a quick buck.  It’s interesting that this one is set in the Outerbanks, because you usually don’t see movies take place there unless they’re written by Nicholas Sparks, but the film is shot so gloomily that it doesn’t make it look like a place you’d ever want to go.  It just makes these characters have southern accents which you tire of quickly. 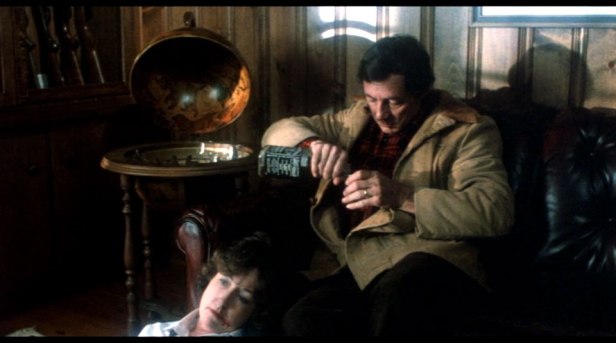