PLOT: A couple mourning the loss of their college-aged son move into a house in rural New England.  Not long after, they start experiencing some supernatural occurrences that may not be friendly.

I almost didn’t stick with this one, but I’m glad I did.  It starts off slow and I had trouble focusing early on, scrolling through Twitter and Facebook before eventually going back to it.  While I wouldn’t say this is one of my favorite films I ever watched, it did get better and once things started getting good, I enjoyed myself.

Anne and Paul move into a house in rural New England, just a few months after their son was killed in an accident.  Once they settle, things are a bit off: picture frames fall off the wall, they hear bumps in the night, and they can’t seem to figure out why the basement is a scorching 90 degrees all the time.  So, Anne invites the parents of their son’s college roommate to stay the weekend, as the mother, May, happens to be a bit of a medium.  And that’s when things get worse.

This is another film, like The Void, that deals with loss of a child; I guess that’s sort of a common theme in horror films.  Anne and Paul seem to be haunted, figuratively, by the loss; their relationship seems to be strained, almost incomplete.  They force conversation with each other in hopes to keep themselves going.  It’s heartbreaking to watch; you feel for them, but this isn’t exactly Ordinary People.

The cast is decent; this is the second film this 31 Days of Horror I reviewed starring Barbara Crampton, in two very different roles.  We also see a familiar face in Lisa Marie, who you may know as Tim Burton’s impossibly hot girlfriend/fiancée in the 1990s.  She plays May, and it isn’t until she and Larry Fessenden (as Jacob) show up that the movie starts to pick up some steam.  I mean, the drama of the mourning parents works well enough, but there’s a point where we get it and it starts feeling like paint dry.  From then on, We Are Still Here picks up steam and goes into the second and third act with a lot of things that work.

Not too gory.  There’s a cool moment where someone gets a neck full of an entire knife set and someone gets impaled, but once the body count starts piling up, the gore is minimal.

There are some pretty good scares in this, that you’d probably consider jump scares, but they are well-earned.  None of them feel particularly cheap and some are actually pretty decent. 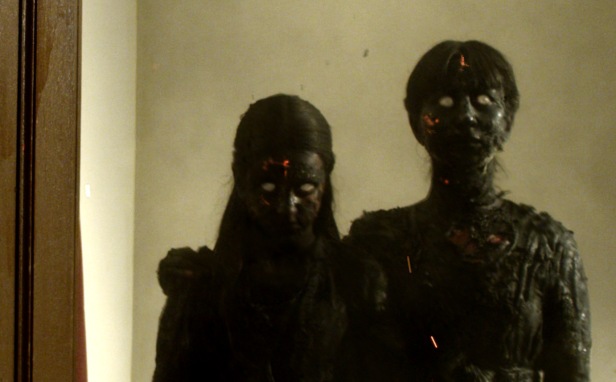 Nothing.  The ghosts in this one totally cock-block someone.

The film is a bit uneven, but manages to end on a, more or less, high note.  The performances are pretty good out of the four main actors and the ghost effects are well done, pun intended.  If you can stick with it through the first act, you’re rewarded with a decent haunted house movie, though it sort of cribs a little bit of its mythology from It.