PLOT: A small-town sheriff investigates a recent string of murders and the fact that the bodies seem to be coming back to life.

Back in college, myself and a few friends sat down to watch this movie, but we turned it off about 20 minutes in because we were bored.  Since then, I’ve never revisited it until I saw that this was available to stream on Shudder. I’m glad I went back to this one, because I wound up really enjoying it.

When a string of dead bodies start popping up, a local sheriff starts investigating the possibility of foul play. But when one of the bodies seems to have reanimated, he starts to uncover some more supernatural forces at play.

One of the best parts of this fill is Jack Albertson, who you may know better as Grandpa Joe from Willy Wonka and the Chocolate Factory. This is a much different role, as he plays a veteran mortician that feels like he’s being undervalued and disrespected. It’s interesting to note that Albertson would actually pass away shortly after the release of this film, and it’s a fine performance to go out on.

There’s a few deaths in this one, but the gore is pretty understated; nothing particularly memorable, but it also doesn’t feel like it’s missing.  There some cool makeup effects by Stan Winston, but this isn’t about the gore. 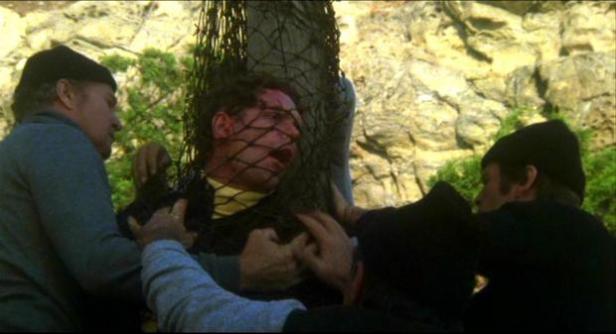 This movie isn’t scary, but it’s quite atmospheric. Rather than trying to scare you, it’s more about setting up the murder mystery aspect.

We get some nudity in the beginning, but nothing afterwards.

I really dug this movie.  It does a great job of setting atmosphere and creating a nice mystery. I like these sort of movies that revolve around small towns in which everyone is involved in a conspiracy. It’s sort of like Halloween III: Season of the Witch or even Hot Fuzz. Jack Albertson is really good in this one and it leads to a pretty memorable finale.