PLOT: A Desert Storm Army vet, killed by friendly fire, comes back from the grave to seek vengeance on the unpatriotic members of his hometown.

This movie is a part of the dime-a-dozen horror films that went directly to video in the mid 1990s. Basically, have a ludicrous high concept idea, make some box art that’s going to stand out, and rest assured, enough people are going to pick it up and rent it based on pure curiosity. There are a handful of movies like this that are burned into my memories from there place on the rental shelves: The Dentist, Jack Frost, The Ice Cream Man, a handful of Puppetmaster sequels, and Uncle Sam. Most of these films are rather forgettable, but don’t take themselves very seriously, which earns them a suspect “horror-comedy” moniker, but sort of fail on both fronts. Uncle Sam is not an exception to this rule.

We open the film in the middle of Operation: Desert Storm and our titular Master Sergeant Sam Harper has been killed by friendly fire. Before he breathes his last breath, he kills the last guys standing in his platoon, and utters his only true catchphrase before he dies. Back home, Sam’s death is met with conflicted feelings by both his wife and his sister, as we find out that Sam was probably not exactly a hero on the home front. His nephew Jody, on the other hand, looks up to his Uncle Sam, as far as taking up his feelings of nationalistic patriotism and calling his Vietnam-protesting teacher a coward. Even when another vet, played by Isaac Hayes, tries to tell Jody about the complexities of war, Jody has a hard time believing that anything could be more noble than killing in the name of America.

Eventually, for some reason, Sam comes back from the dead and starts killing people for their unpatriotic ways, including a corrupt politician, a conniving lawyer (who is dating his widow), and Jody’s teacher (Timothy Bottoms). It’s up to a boy blinded by fireworks that now has ESP for some reason, Isaac Hayes, and Jody to put an end to Sam’s murdering ways.

This movie is pretty stupid, as one would expect based on the title and the premise. It probably played a lot of late nights and, as previously mentioned, probably got a ton of curiosity rentals back in the heyday of VHS. Otherwise, it’s not particularly memorable. It’s not funny and it’s not scary, and I’m not quite sure if there’s supposed to be a commentary on anything. It seems like it wants to, but there also doesn’t seem to be any point where the filmmakers took any of this seriously. This is a relic of a bygone era and not one that actually needs to be seen.

Some kills here and there with some gore, but not much actually. For a movie that is trashy as hell, the kills are sort of weak. 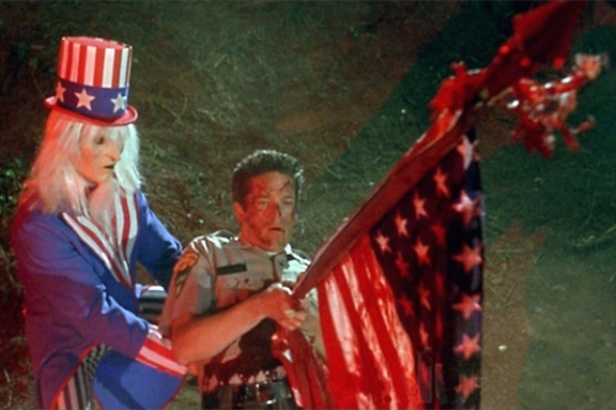 Meh. It’s just all so silly and doesn’t take itself seriously enough to be scary. It also takes place primarily in the day time, which is an odd choice for a horror movie.

There’s a nude scene with someone peeking through a window at a woman after her shower, so it checks the box, but again, you kind of expect more from a movie like this. It’s trash, but trash that doesn’t really go that far to make itself memorable.

This is not a good movie. Isaac Hayes is actually the best part of the film, and that’s not saying much. It’s a kitschy, goofy story, and that would be fine, but it’s nothing special past that. It’s not funny, doesn’t amp up the gore or any good exploitation. The kills aren’t particularly memorable and there are barely any good one-liners. If there’s a low bar for this movie, it didn’t reach it.