PLOT: A police lieutenant tries to track down the Gemini killer, whom he believes is committing a series of murders. What he uncovers may have something to do with the first film in the series.

This could be, aside from Halloween III: Season of the Witch, the most underrated horror sequel of all time. Seriously, why am I just discovering this one to be a pretty excellent film? George C. Scott AND Brad Dourif? Sign me the fuck up.

George C. Scott plays Lieutenant Kinderman a D.C. detective and former friend of the now deceased Father Karras from the original The Exorcist film. As Kinderman pays tribute to his former friend, on the anniversary of his death, with another priest by the name of Father Dyer. Meanwhile, a series of gruesome murders begin to occur that resemble the work of the Gemini killer. The only problem: the Gemini Killer has been dead for 15 years. The investigation leads Kinderman to the psyche ward and a patient that resembles Father Karras, but claims to be the Gemini Killer.

The sequels to The Exorcist are oft-maligned and with good reason. Sometimes, they’re simply bad, like The Exorcist II: The Heretic, and sometimes they’re just a complete mess, which you can consider the prequel(s) directed by Paul Schraeder and Renny Harlin, but The Exorcist III almost seems to be the forgotten entry in this film series. But this one is actually pretty good. It’s by no means the original film, which is arguably one of the greatest horror films of all time, but this is a quality sequel.

Most of the quality lands in the performances of George C. Scott and especially Brad Dourif. Dourif is so incredible in this film; he chews every goddamn scene and he’s so wonderful at it. I can’t believe he was never a bigger star. It’s really a shame, because he’s fantastic in this movie.

Lots of heads being cut off in this one and one of the priests just gets absolutely savaged when he’s trying to perform an exorcism. That scene is fantastic.

I’ll give this movie some points because of Brad Dourif’s performance. It’s wild and he ups the creep factor to the highest level. But otherwise, this movie does lean a little towards the slasher genre, which I don’t find particularly scary.

Other than a photo of a naked woman, not much.

Propped up by excellent performances by George C. Scott and Brad Dourif, the film is actually a worthy sequel that may have been forgotten as time has gone on. It’s a shame, because this one is a solid entry and much better than The Exorcist II: The Heretic. And it has Patrick Ewing in it, too. 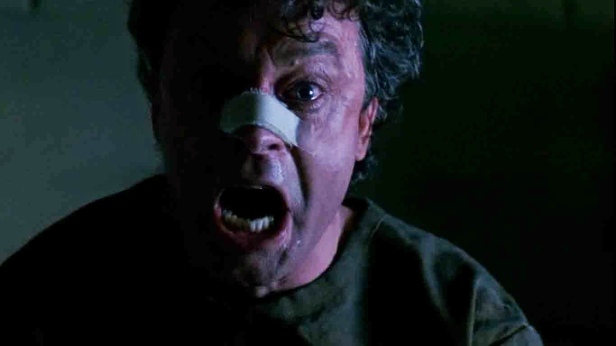