This week marks the release of GI:Joe Retaliation.  While Rise of the Cobra was laughable, it doesn’t make me forget the great times I spent with not only the action figures, but the animated series as well.  It got me thinking about all the cartoons I watched as a kid, so I compiled a list of the five series that made me tune in each and every week.

Keep your dusty old Daffy Duck and Bugs Bunny, grandpa.  I’ve got Plucky and Buster.  While, of course, I loved Looney Tunes and I blame Bugs Bunny for any smartass remark I’ve ever made, Tiny Toons was ours.  For the most part, it kept the same sort of humor, if only a little updated for the new generation.  Without a doubt, it had one of the greatest specials I had ever been a witness to: How I Spent My Summer Vacation.  It was the perfect long episode and I can’t tell you how many times I rented the VHS of it from the video store… Look it up, kids.

I remember I once got into a fight with a kid when we were about six over the fact that he thought the Ninja Turtle that came to his birthday party was real.  I guess I was sort of a dick, but I know the difference between animation and real life.  Anyway, like any kid in the early 90s, Teenage Mutant Ninja Turtles was my jam.  What’s not to like: a catchy song, pizza, giant amphibians that carry sharp things? That’s a recipe for a party and I totally RSVPed back when I was a youngin’.  And if you really want to know, I was a Raph fan. 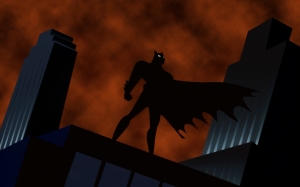 The WB had my number when I was a kid in the 90s and Batman: The Animated Series became appointment watching from the first episode.  Before Christopher Nolan’s universe, I’d dare to say that this was the best attempt to bring the comics to life.  It was dark, well-written and had the advantage of telling compelling stories over countless of hours of airtime.  Mark Hamill’s version of the Joker is legendary and the series is the reason that we have his comic foil, Harley Quinn.  And you can’t put a price on that.

What a genius show Animaniacs was.  Granted, I probably understood about one-third of the references and jokes that the show contained, but I didn’t miss an episode.  It didn’t matter though; the show didn’t dumb it down for children and we still loved it.  It’s a testament to smart writing and the show itself is partly responsible for everything I know about comedy.  What makes this show even better is that it continues to hold up even now that I am pushing thirty. 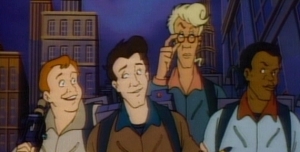 In terms of pop culture, one of the first things I absorbed is everything Ghostbusters.  This included, but was not limited to, the movies, the action figures, and the cartoon series.  Seriously, I had nearly every action figure, including the Fire House and had my own jumpsuit, proton pack, and trap.  I don’t remember much about the cartoon except for the fact that Egon was my favorite but I wasn’t allowed to be him because I was the fat kid and had to be Ray.  True story.  Deep emotional scars aside, I do remember having a nightmare when I was really little about show’s version of the Boogeyman.  Scared the shit out of me.  I guess that’s not really putting aside emotional scars, but whatever; the show was awesome.