This year, for Halloween, I’ve decided to go as Tony from Die Hard.  Who is Tony, you ask?  Why, he’s one of Hans Gruber’s henchman and the man in the picture above.  In the past, I’ve been everything from Alex Delarge to Shaun from Shaun of the Dead, but this year, I’ve decided to go with one of the most obscure ideas I could think of.

It’s all fun and games when you go as someone everyone recognizes like Iron Man or something as unimaginative as that, but if you’ve ever worn an obscure costume, you know the appreciation you’re met with when someone recognizes you.  It can basically make their night.  So here’s some ideas for obscure movie characters that could make some pretty good Halloween costumes.

5. The Guy in the Dog Suit, The Shining 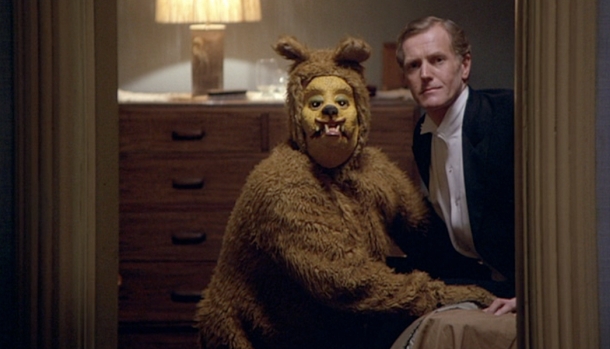 It’s probably one of the creepiest, unexplained things ever left in a movie, but if I saw someone in this costume, I’d have to buy them a drink.  The dog suit guy is just one of the head-scratching moments at the end of The Shining that helps to pay off the film’s slow burn.  It makes no sense, it’s kinky in all the wrong ways and it makes me want to take a shower.  The perfect Halloween costume.

4. Anybody From The Big Lebowski

Lebowskifest has basically become Halloween for the hardcore Lebowski fan, but in a more general population, I rarely see a Lebowski Halloween costume.  When it comes to this movie, I’m not talking about The Dude and Walter; I’m more interested in The Nihilists, Jesus, and Maude Lebowski.  I would practically crap myself if I saw a group of dudes that looked like Kraftwerk walking around with a nine-toed woman.

Now that I think of it, Happy Gilmore himself would be an easy costume to pull off, but my money is on Mr. Larson.  The man that once played Jaws in Moonraker, Richard Kiel stands at a towering 7’2”, so you’d have to be at least 6’3” to pull this costume off convincingly.  But anyone who has seen the movie would recognize that haircut and the orange “Guns Don’t Kill People.  I Kill People” t-shirt that he wears.  On a side note: remember when Adam Sandler was funny?

Star Wars has basically created an entire universe of fictional characters that you may love, hate, or feel completely indifferent about.  Some are annoying (Young Anakin), some are racist (Grotto), and some are both (Jar Jar Binks).  One character that is universally loved, though, is Jek Porkins.

If you don’t know who Porkins is, he’s one of the X-wing pilots during the assault on the original Death Star, known by historians as the Battle of Yavin.  Jek is an integral part of the assault and his legacy will live on forever as the greatest death scene in the series.

Let’s face it: women own Halloween.  Call me a chauvinist, but young women dressing like tramps on Halloween is everything that’s right in this country.  So what better way to celebrate freedom than to dress like an alien with an extra udder?  Honestly, I couldn’t think of five female characters in order to make this a two-part 5 For Friday, so she’s going to get the top spot because she’s the token entry and because boobs.

One thought on “5 For Friday: 5 Obscure Movie Characters That Should Be More Popular Halloween Costumes”