PLOT: An unknown killer terrorizes a group of teens participating in a cheerleading camp in the middle of the woods.

If you mix Friday the 13th with Pop Warner, this is what you get. Cheerleader Camp is just another clone of the standard “Ten Little Indians” sort of storyline, where each character we meet gets systematically eliminated. It’s like Survivor without the tribal council. So, better.

You know the score: people go missing, wind up dead, rinse, and repeat. The minor change here is that the final girl is just as much a suspect of the killings as anyone else in the film because she has crazy nightmares that mirror the murders in obscene detail and she starts to go a little nutty because of them. Betsy Russell is the lead and she does a fine job in the role. All in all, it’s an average slasher movie from the 80s with the unfortunate duty to try and pass off a 28 year-old, balding Leif Garrett as a high school teen. It’s ridiculous.

About the average amount of gore you’d expect from a slasher film from this era. People are disemboweled, stabbed, and someone gets some hedge clippers through the back of their neck. 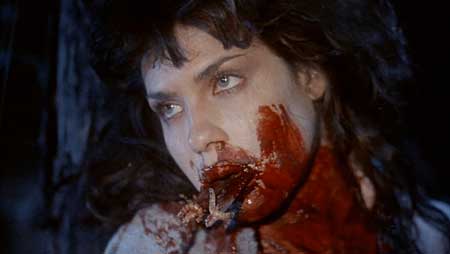 This one tries to achieve a balance between teen sex comedy and horror film, and it’s the fact that they try so hard to be comedic that it kind of ruins any sort of tension that you may feel in it. Friday the 13th, for example, does the tension right, and while you might not be scared off your ass, it just does the horror right.

There’s plenty of eye candy in this one. You get some extended flashes of topless girls while they sunbathe and there’s one scene of oddly fully-clothed sex that is played for laughs. You can’t really expect too much, but you get a little bit.

This is a strictly by-the-numbers slasher movie. It doesn’t really try to reinvent, but it doesn’t make too many mistakes. Betsy Russell is a decent final girl and nice to look at, but Leif Garrett is a distraction. The comedy is kind of lame, but maybe for a teen that wants to get with watching a movie with a little bit of nudity, this is a late night score. 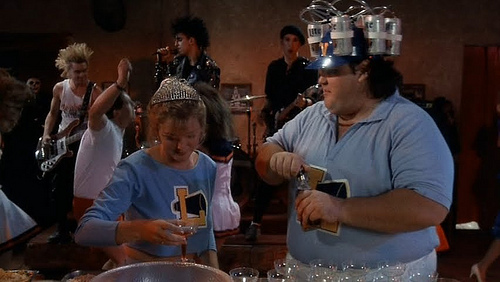